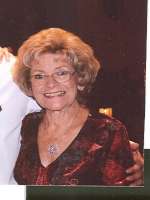 Passed away peacefully December 5th, 2010 at Hospice of the Valley with her family by her side. She was a very special person in so many ways. Her presence filled a room with love, laughter and her unending smile. She was born in Dallas, TX in 1926 to Robert and Eva Bechtold. Her father worked for the telephone company and her mother was one of the 1st employees of the Nieman Marcus stores. Eva (Mama Evie) designed and made all of Nelwyn’s clothes while growing up in Dallas. It was at Woodrow Wilson High School where she met and fell in love with Neb Keeton at the tender age of 17. They were married after high school and her new husband Neb quickly left for Iceland because of World War II. Upon returning home they decided to relocate to Phoenix, AZ in 1946 to follow Neb’s Uncle Russell in the family grocery business. The family opened Neb’s markets which was a very thriving business until they decided to close in 1992. Nelwyn raised 2 sons Vince and Neb III, which were her most prized possessions. She lived a very full and glorious life filled with many wonderful friends, meeting people everywhere especially at Paradise Valley Methodist Church where she was an active member for many years, singing in the choir and ringing her “bells” until last year. She was passionate about her family, playing the piano, singing, music, gardening, traveling, and finding that special gift for all the many special people in her life. She will always be remembered for her endless energy, upbeat personality, Thanksgiving feasts every year and her love of life itself. She was truly a remarkable lady and will carry on her angelic duties in heaven. To know her was to love her and we miss her very much! She was preceded in death by her husband Neb of 56 years and her oldest son Vince. She is survived by her son Neb III (Lynette), her sister-in-law Pat Pierce. Daughter-in-law, Sandy, grandchildren Blue, Chais Ondeck (Dan), March, Sunny Karassik (Jesse) and Neb IV (Susan), great-grandchildren Thomas, Keeton, Noah, Lucas and Juliet. Memorial Service will be held at Paradise Valley United Methodist Church, 4455 East Lincoln Drive at 1:30, Monday, December 13, 2010. In lieu of flowers, donations can be made to Paradise Valley United Methodist Church or Hospice of the Valley, 1510 E. Flower St., Phoenix, AZ 85014

Offer Hugs From Home Condolence for the family of KEETON, NELWYN B