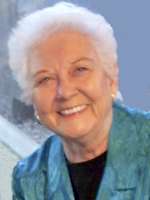 Jeannette Kieffer, Born in Bowling Green, Kentucky nearly 82 years ago passed away of cancer on August 6, 2013.

Jeannette was a very bright and athletic leader among her peers. She excelled both in academics and as a varsity basketball player.

She was a sister to two older brothers, Ron and John Robert and two younger brothers Larry and Jim, all of who teased, protected and adored her. Her parents, Bertie and Kathleen Miller were incredibly nurturing role models.

At the end of World War II, she married the love of her life James Kieffer and together, for the next 53 years, raised a family of four sons in Phoenix, Arizona.

After her Children grew into successful adults, she worked in a variety of roles with a law firm and at St. Joseph’s Hospital.

Jeannette was involved in many charity efforts in Phoenix; very special to her was the work of the Society of St. Vincent de Paul.

She was a loving wife, mother, grandmother, and great-grandmother who loved her family above all things on earth.

Survivors include her sons and daughters in law: Jim, Bill and Maureen, Daniel and Gail, David and Chris, many deeply loved grandchildren and several precious great grandchildren.

Your family says: “Thank you for your life and the legacy you gave to us!”

Offer Hugs From Home Condolence for the family of KEIFFER, MAYME JEANNETTE