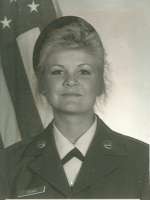 age 47, passed away on December 15th, after a courageous battle with cancer. She was born in Phoenix on October 2nd, 1963. She graduated from Camelback High School in 1981. Jackie joined the Air National Guard on Father’s Day in 1987 (in the footsteps of her father, Marion Keith Thomas). She retired as a Master Sergeant in September 2010. Jackie is survived by her husband, Reid, son Jeremy, parents, Keith & Lylia Thomas and brother Danny. She is also survived by many members of her extended family. A Memorial is scheduled for 11:00 A.M. Tuesday, December 21st at Whitney & Murphy Funeral Home, 4800 E. Indian School Rd., Phoenix. In lieu of flowers the family is requesting donations be made to Hospice of the Valley, 1510 E. Flower St., Phoenix 85014 and/or the Family Readiness Program at the 161st Air Refueling Wing.

Offer Hugs From Home Condolence for the family of KEILBACK, JACQUELINE LOUISE (Thomas)