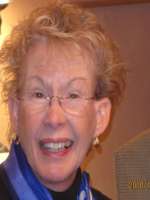 beloved wife, mother, grandmother, sister, friend, and colleague, passed away on February 24, 2011. Born in Boston, MA, Suzanne was the third of four children of Paul White and Margaret (Sheehan) White. She grew up in Cambridge and graduated with highest distinction from Emmanuel College in Boston. After graduation, she taught elementary school. She met Peter Kelly, the love of her life, in the spring of 1961 at a party and they married on the Fourth of July, 1964. In 1965, Suzanne and Peter moved to Buffalo, NY for Peter’s medical training. In 1965, Peter II was born on Suzanne’s birthday, July 17. On the same date one year later Andrew was born, creating a crowded but very efficient birthday celebration for the family in the years to come. By 1970, Mara and Sarah had joined the family and Suzanne was raising four children under the age of five. In 1972, Peter and Suzanne moved to Phoenix. She met the challenge of a new city with no nearby family or friends with determination and humor. In 1975 Suzanne enrolled at Phoenix College to pursue her interests in math and science. Three years later, she earned a Master’s in Microbiology from Arizona State University (ASU). After, she did research for the Centers for Disease Control Hepatitis Laboratory, work she loved. When the CDC laboratory closed, Suzanne taught Microbiology and Environmental Science at Scottsdale Community College. For twenty years, she was a respected professor, heading up both the Biology Department and later, the Math and Science Division. In 1995 she received her PhD in Microbiology from ASU. She never grew tired of science, and learning was a lifelong value. Over the years, Suzanne built her network of friends until Phoenix became home in both place and spirit, and cold winters became unimaginable. Weekends were filled with kid activities, dinner parties and time with her girlfriends; Thanksgivings were spent on the Verde River; summer vacations in San Diego. She juggled a career and a houseful of children with an efficiency and zeal that was awe-inspiring to her now grown children and matched only by her love of chocolate. And, of course, there was her husband and best friend, Peter. Whether reading the morning paper, traveling or discussing daily events, Suzanne loved to be with Peter.

Suzanne was a truly exceptional person: deeply intelligent, loyal, driven, generous, hard working, fun, opinionated, and full of love. She lived life to the fullest and will be missed terribly by her family and friends. She is survived by her husband Peter; sons Peter and Andrew (Stacey); daughters Mara and Sarah; and grandchildren, Colleen, Bridget and Tara; sisters, Alice White and Mary White. She was pre deceased by her brother Joseph White. A Visitation will be held at Whitney & Murphy Funeral Home, 4800 E. Indian School Road, Phoenix Sunday, February 27th from 5:00 p.m. to 8:00 p.m. with readings at 7:00 p.m. A Funeral Mass at St Francis Xavier Church will celebrated on Monday, February 28th at 1:30 p.m. immediately followed by a reception at the Phoenix Country Club, 2901 North 7th Street, Phoenix. The burial will be private.
In lieu of flowers, donations may be made in the name of Suzanne Kelly to the Maricopa Community Colleges Foundation at 2419 W. 14th Street, Tempe, AZ 85281.