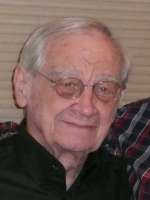 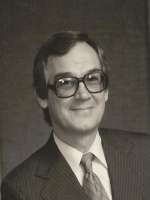 Bernard Kennedy, 84, of Phoenix, Arizona, passed away peacefully at his home on July 28, 2012. He was born on April 8, 1928 in Cleveland, Ohio. After serving in the Army from 1946-48 as a gunner, he graduated from Miami University, Ohio in 1956 with a Bachelor of Architecture Degree. In 1962 Bernie left Ohio for Phoenix where he first worked for Chopas & Starkovich, then Guirey, Srnka, Arnold & Sprinkle. In 1979 he started his own firm of Bernard Kennedy & Associates, Architects. Survivors include his wife Fran, children Jim Medland, Suzy Atelian, Sharon Hawkins (Ross), grandchildren Tyler, Justin, Brandon, Taylor, Sarah, Megan, and two great-grandchildren. He is also survived by his sister Bernardine Savage, and many nieces and nephews. Visitation will be held from 5-8pm Tuesday, August 7, with a Rosary at 7pm at Whitney & Murphy Funeral Home, 4800 E. Indian School Road, Phoenix. Funeral Mass will be at 10am on Wednesday, August 8th at St. Theresa Catholic Church, 5045 E. Thomas Rd. Interment to follow at St. Francis Catholic Cemetery. The family requests that in lieu of flowers please make a contribution in his name to Hospice of the Valley, 1510 E. Flower St., Phoenix, AZ 85015.

Offer Hugs From Home Condolence for the family of KENNEDY, BERNARD THOMAS