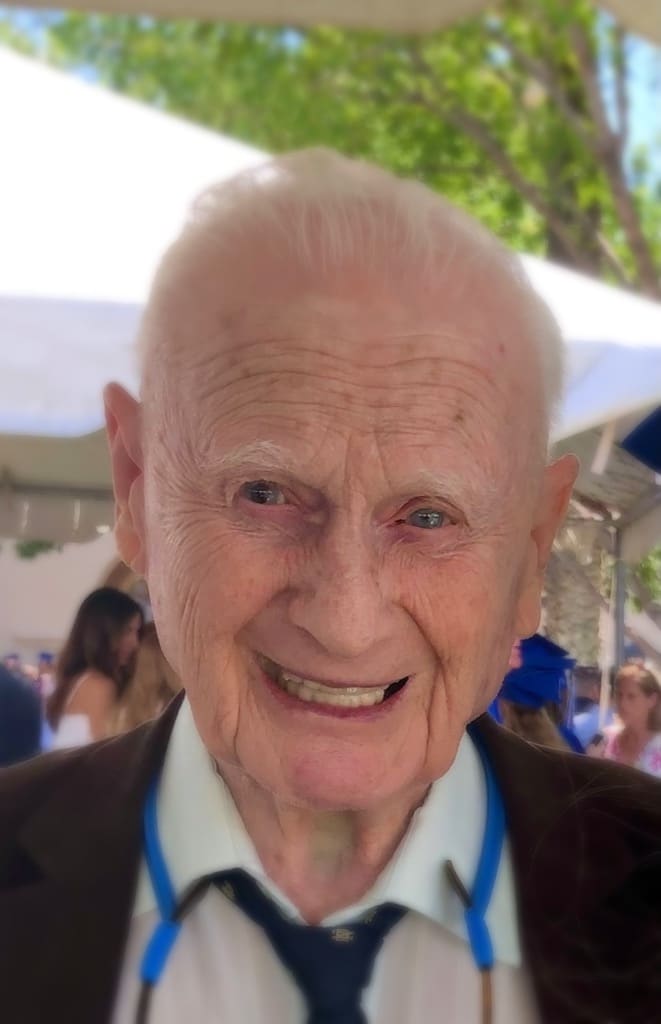 Dr. Joseph Mathias Kennedy, MD passed away peacefully in his home surrounded by his family. He was one of seven boys, born February 24, 1927 to Frank and Margaret Kennedy in Brooklyn, NY. After graduating from Mount Saint Michael Academy, Joe joined the United States Army in 1945 and was discharged due to the end of WWII. With the aid provided by the GI bill, he graduated from the University of Notre Dame in 1948, where he studied chemistry and played the trombone in the marching band.

Joe worked as a laboratory technician in San Bernardino, CA for 10 years before entering medical school at Universidad de Nuevo Leon, Monterrey, Mexico. Going to school there with little knowledge of Spanish was great fun for him. After graduating, he came to Phoenix to start his Internal Medicine Residency at Maricopa County General Hospital and St. Joseph’s Hospital. He met and married Cecelia Gorman on September 30, 1961 at St. Thomas the Apostle Church. They moved to Santa Monica, CA where he completed a fellowship in Rheumatology at UCLA where his research on the pioneering non-steroidal anti-inflammatory drug Indomethacin was published. He returned to Phoenix to start his internal medicine practice and raise his family.

Joe was an early President for the Arizona Chapter of the Arthritis Foundation and operated his private practice for 30 years from the Grunow Medical Building. After closing his practice he went to work with the Veterans Administration for 20 years.

He was known as ‘kill shot Joe’ on the racquetball court and was also an early bird hiker on the North Mountain hiking trail. His other hobby was studying languages. He enjoyed meeting people and speaking with them in their native language.

Joe’s cheerful sense of humor will be missed by many, including his family, friends, dear friend Jeanne, and many others. Funeral Mass will be celebrated at St. Francis Xavier Church, 4715 N. Central Avenue, Phoenix, on Tuesday, March 30, 2021 at 9:00am.  The Funeral Mass will also be live streamed at https://sfxphx.org/livestream.  Condolences and Hugs from Home may be expressed at www.whitneymurphyfuneralhome.com

Donations in lieu of flowers can be made to the Arthritis Foundation, www.arthritis.org.

Offer Hugs From Home Condolence for the family of KENNEDY, DR. JOSEPH MATHIAS