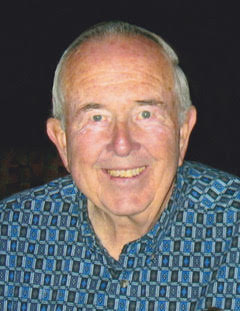 Harry W. Kennedy, 87 of Phoenix. Our dear friend Harry flew peacefully into the arms of our Lord on Friday the 28th of September. He will always be remembered for his kind smiles, firm handshakes and hugs, and enormously generous spirit. Harry was a native of Phoenix and graduate of North High School. He spent nearly 30 years with the Bell Telephone companies and remained an active member of the Telephone Pioneers organization after retirement. Family and friends will always remember the joyful times spent at the cabin he built by hand with his brother-in-law Bob DeBusk. An avid traveler, Harry enjoyed many trips abroad with his family, friends, and civic organizations including trips to Russia, Italy, Scotland, and (his favorite) Ireland where he was hosted by the O’Gradys. He was a fervent supporter of law enforcement and enjoyed his time volunteering with the Department of Public Safety Motorist Assistance Program. Harry is survived by his wife of 64 years, Marilyn, son Robby, Daughter Susan (Gill), four grandchildren Katy Holland (Joseph), RJ Gill (Courtney), Patrick, and Kerry, and five great grandchildren. Harry touched so many lives and while we sadly miss him here, Heaven is now a beautiful soul richer.
A Funeral Mass will be celebrated at 10:00 A.M. on Tuesday, October 9, 2018 at Saint Jerome Catholic Parish, 10815 N. 35th Ave., Phoenix. A reception to celebrate Harry’s life will follow.

Offer Hugs From Home Condolence for the family of KENNEDY, HARRY W.