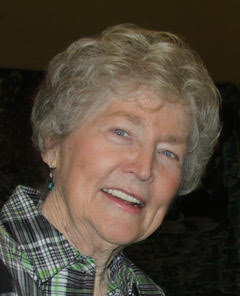 Marilyn Kennedy (nee DeBusk), 88, our beautiful Marilyn peacefully left this world on Thursday, November 15th to join those awaiting her in heaven. She will be forever remembered as a loving and generous friend, and a devoted wife and mother. Born September 29th, 1930, Marilyn was a native Arizonan and lived a rich life full of joy. A graduate of Tucson Amphitheater High School, Marilyn spent her early years in Tucson and returned to the Valley at age 19. She spent her professional life working for Valley National Bank and later with Mountain Bell Telephone companies. In 1954 Marilyn married the love of her life, Harry, and they spent the next 64 years together. As avid travelers, Harry and Marilyn enjoyed so many trips abroad with family, friends, and civic organizations. Summers were filled with long stays alongside friends and family at their cabin near Heber Arizona.
She is preceded in death by her husband Harry and three brothers Bill, Bob, and Don DeBusk. Marilyn is survived by her son Robby, daughter Susan (Gill), four grandchildren Katy Holland (Joseph), RJ Gill (Courtney), Patrick, and Kerry, and five great grandchildren.
A Rosary service will be held at 9:30 A.M., with a Funeral Mass beginning at 10:00 A.M. on Tuesday, November 20th, 2018, at Saint Jerome Catholic Parish, 10815 N. 35th Ave., Phoenix. A reception to celebrate Marilyn’s life will follow.

Offer Hugs From Home Condolence for the family of KENNEDY, MARILYN