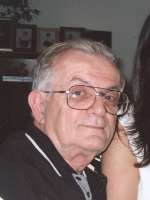 74, died December 19, 2010. Born in Cheyenne, WY, February 6, 1936, to Nicholas and Venetia Ketcios. A Scottsdale resident, he retired from Arizona State Hospital. A US Army veteran, he moved to Arizona in the 1950’s to attend ASU. In 1962 he married Carol Tsevdos in Cleveland, OH. A beloved member of the Greek community, he loved his church and was a devoted husband and father. He enjoyed sporting events and bowled in a league for over 40 years. He was preceded in death by his wife Carol. He is survived by his son Nicholas Ketcios (Veronika); daughter Joanne McIntire (Eric) and grandchildren, Camden and Braden McIntire. Visitation 6-8PM with Trisagion Service at 7PM, Monday, Dec. 27, at Whitney & Murphy Funeral Home, 4800 E. Indian School Road. Funeral Service 10AM Tuesday, Dec.28, at Holy Trinity Greek Orthodox Cathedral, 1973 E. Maryland Ave., Phoenix, AZ 85016.

Offer Hugs From Home Condolence for the family of KETCIOS, LOUIS NICHOLAS