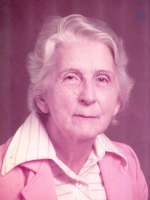 95, died peacefully of old age on January 7, 2012. She was a long-time Phoenix resident and member of St. Agnes Parish. She was retired from the U.S. Attorney’s Office. She is preceded in death by her husband, William and son Richard and is survived by her children William, Marianne and Patricia; her grandchildren Shawn and Shannon; and great-grandchildren Hannah, Elle and Ainslie. In lieu of flowers, donations may be made to the American Heart Association. Visitation will be held from 6-8pm, Sunday, January 15 with a Rosary at 7pm at Whitney & Murphy Funeral Home, 4800 E. Indian School Road, Phoenix. Funeral Mass will be at 11:30am, Monday, January 16 at St. Agnes Catholic Church, 1954 N. 24th Street, Phoenix. Interment will follow at St. Francis Catholic Cemetery.

Offer Hugs From Home Condolence for the family of KING, MARYANNE