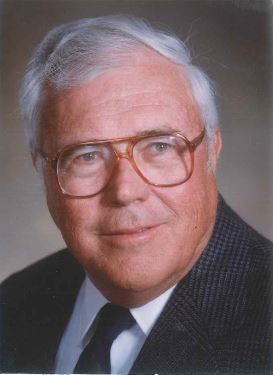 PHOENIX – Arthur H. Kinneberg, 96, passed away peacefully in Phoenix on January 12. Art was born in Cass County, Minnesota, on July 12, 1921 to Andrew and Dorothy Kinneberg, and raised in Battle Mountain, Nevada. He was preceded in death by his parents and siblings Iris, Kathleen and David. He is survived by the love of his life, Jane, with whom he shared 72 years in a beautiful marriage; four children: Joan, Bruce (Cynthia), Eric (Meg) and Bill (Janet); six grandchildren; six great grandchildren and his sister Janet.
Art studied for three years at the Mackey School of Mines at the University of Nevada in Reno before earning an appointment to the U.S. Naval Academy (Go Navy, Beat Army!) class of 1946, graduating in 1945 with the accelerated wartime schedule. After his discharge from the Navy in 1948, he followed in his father’s footsteps into a career in the mining industry which took him on an incredible journey. Beginning in McGill, Nevada, he was soon transferred to the Braden Copper Company in Chile where he worked for seven years. He would return to the U.S. in 1958, then with a family of six, starting his successful career with the Phelps Dodge Corporation in Morenci, Arizona. His various job assignments with Phelps Dodge would take him to Douglas, Arizona and Tyrone, New Mexico and, in 1982, to Phoenix as the Vice President and General Manager of the Phelps Dodge Western Operations and a member of the corporation’s Board of Directors. Art had a keen interest in community affairs and politics. He was a member of the Phoenix 40, participating in some of the key issues confronting the fast-growing city, a strong proponent of the Arizona Town Hall, and an active supporter of the Republican Party. He served on the board of directors of Valley National Bank and was a member of Rotary Club, Shriners, BPOE and ATΩ. After retirement from Phelps Dodge in 1985, Art served ten years on the University of Arizona Medical Center’s Board of Directors, including a term as president. Art loved outdoor activities, enjoying countless fishing and bird hunting trips and was an avid golfer as a member of the Phoenix and White Mountain Country Clubs. And he was never more excited than being a spectator at his children’s and grandchildren’s countless sporting activities, with a special attachment to baseball, which he considered the sport that best reflected America’s values. Travel was also a great love of his, visiting four continents, with a particular passion for his trips to Chile. He often served as a tour guide for friends and family to introduce them to the beauty of the country and friendliness of the people. A Memorial Service will be held on Friday, January 26th, at 11:00 A.M. at All Saints Episcopal Church, 6300 North Central Avenue, Phoenix. In lieu of flowers, contributions may be made to Banner – University Medical Center Tucson. Arrangements entrusted to Whitney & Murphy Funeral Home.

Offer Hugs From Home Condolence for the family of KINNEBERG, ARTHUR H.