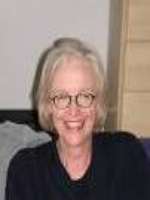 Her childhood was spent in Hamilton, New York, and she moved with her family to Phoenix in 1954.  After graduating from Xavier High School and the University of San Diego, she taught second grade in the Scottsdale School District for a number of years.  Later, she taught kindergarten at St. Agnes School and was a training coordinator for the Clerk of the Superior Court.

She was a faithful member of St. Francis Xavier Parish and was active in the Sacred Heart Alumni Association.

Offer Hugs From Home Condolence for the family of KLEINSCHMIDT, MARGARET