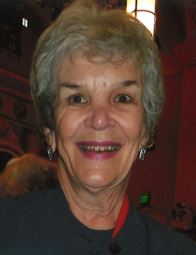 Esther Mary (Mariassy) Kmetty of Phoenix, Arizona, passed away September 1st, 2017. Born in Budapest, Hungary, to Dr. Bela and Katalin Mariassy. While growing up in Budapest, she attended the Sacred Heart School, Sophianum, which led to a lifelong commitment to the Alumnae of the Sacred Heart. In 1948, the family escaped Communism and immigrated to the United States. Ultimately settling in Phoenix, her father established McDowell Animal Hospital. Known as “the Hungarian girl” when she started at St. Agnes Catholic Grade School, Esther quickly got herself involved and became a leader at St. Mary’s Catholic High School in Phoenix, and continued that passion and those friendships throughout her life. Esther joined Gamma Phi Beta sorority at Arizona State University, and into her first year there she met her Hungarian husband on a blind date. She and Geza Kmetty raised a family and were preparing to celebrate their 56th wedding anniversary this year. A devoted mother, Esther focused on raising their children and was actively involved in several school boards and PTOs. She returned to work as Office Manager of the civil engineering firm she and Geza established, known at the time as McLaughlin-Kmetty Engineering and then EEC/MKE. She was a founding member of Arizona’s “Women Transportation Seminar” and is honored with an annual undergraduate scholarship in her name. As the matriarch of the Mariassy family in the United States, Hungary and Slovakia, she worked tirelessly to nurture relationships with relatives near and far. Esther is survived by her husband, Geza Kmetty and their children: daughter, Viki Snedden (husband, Russell Snedden) and their daughters Katrina and Elise; son, Tony and his children Peter and Anna; and son, Chris and his children Tyler and Kate; her brother, Bela Mariassy, his wife Leigh and his daughters Shawn, Hilary and Kendra. A Vigil will be at 6:00 P.M. followed by a Rosary at 7:00 P.M. on Thursday, September 7th, and a Funeral Mass will be celebrated at 10:00 A.M. on Friday, September 8th, all at St. Theresa Catholic Church, 5045 E. Thomas Rd. A reception will immediately follow at Fr. Feeney Hall. The family is planning to hold a celebration of Esther’s life in the future with details to come. In lieu of flowers, the family requests donations to American Cancer Society – Arizona www.cancer.org/about-us/local/arizona.html at 4550 E Bell Rd. #126 Phoenix, AZ 85032. Arrangements entrusted to Whitney & Murphy Funeral Home.

Offer Hugs From Home Condolence for the family of KMETTY, ESTHER MARY (MARIASSY)