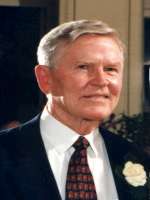 95, of Paradise Valley, AZ, passed away August 28th.  Born in 1918 in Anselmo, Nebraska, he moved to Phoenix with his family in 1920.  His parents Frank and Mary, having sold their wheat farm in Nebraska, built an adobe home and planted a commercial citrus grove north of Camelback Rd., just east of 40th St., where Hugh and his younger brother Frank grew up, and which they later developed.  Hugh attended St. Mary’s Elementary School, Brophy Prep, until it closed in 1935 during the Great Depression, Phoenix Union High School, and Phoenix College.  He enlisted in the Army Air Corps in 1940, was commissioned as a 2nd Lieutenant after training at Randolph Field, San Antonio, Texas; became a Senior Pilot and an advanced S-E flight instructor.  Stationed at various bases in the West and the South during World War II, he advanced from Captain to Major, was Commanding Officer of the 2nd and 3rd Training Groups and Deputy Director of Flying at Luke Field, ultimately attaining the rank of Lieutenant Colonel by war’s end, after which he served in the U.S. Air Force Reserve.  In 1941 he married second-generation Arizona native Margaret Ruth O’Connell with whom he had six children. Hugh became a prominent Valley homebuilder, first with his brother Frank, as Knoell Brothers., and then separately as Customcraft Homes, Hugh Knoell Builders, and Hugh Knoell & Sons.  In the Fifties he owned a plant that manufactured modular wood homes and then trucked them from Phoenix to ranches, mining camps and small towns all over Arizona.  In the Sixties he built upper-end custom homes, particularly in the Arcadia area, and then in the Seventies and Eighties was a production homebuilder throughout the Valley.  After the death of his first wife in 1976, Hugh married Elizabeth Madison in 1982, with whom he happily spent the last three decades of his life.  Hugh was a devout Catholic and dedicated Phoenician, contributing to and participating in many Valley religious and civic organizations: St. Francis Xavier Parish, Brophy College Preparatory, Xavier College Preparatory, St. Vincent de Paul, Kiwanis Club, Knights of Columbus, Valley Forward, Boy Scouts of America, Mt. Claret Retreat Center, St. Philips Church (Payson).  He is survived by his wife Elizabeth (“Betsy”) and his children: Hugh Jr. (Josefina), Christopher (Maureen), Kenneth, Kevin, and Jane McCauley; and by 15 grandchildren and 12 great-grandchildren.  He is preceded in death by his third son, Joseph (Michele). There will be a Rosary at 7:00 pm Tuesday, September 3rd at Whitney & Murphy Funeral Home, 4800 E. Indian School Rd, Phoenix; a Funeral Mass at 4:00 pm Wednesday, September 4th at Brophy Chapel, 4701 N. Central Avenue, Phoenix; and a private Interment Thursday, September 5th, 2013.   In lieu of flowers, the family requests that donations be made to Brophy or to Hospice of the Valley.

Offer Hugs From Home Condolence for the family of KNOELL, HUGH F.