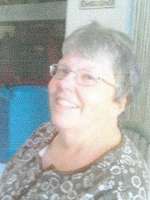 Born October 5, 1951 in Phoenix, Arizona. Died March 21, 2012. Preceded in death by her parents George and Laverne Knorr, her sister Carol Ann, and her brother Jerry. Survived by sisters Joyce, Debbie, Teresa and brothers Kenneth and Larry and also by her many nieces and nephews. She will be dearly missed by her family and friends. Kathy took her great personality and humor to heaven with her. Visitation to be held at Whitney & Murphy Funeral Homes, 4800 E Indian School Road, Tuesday March 27th from 6 to 8 pm. Funeral Mass will be held at 4pm, Wednesday, March 28, St. Agnes Catholic Church, 1954 N. 24th Street, Phoenix. Donations in her memory can be made to the American Cancer Society, 4550 E. Bell Road, Phoenix, AZ. 85032

Offer Hugs From Home Condolence for the family of KNORR, MARY