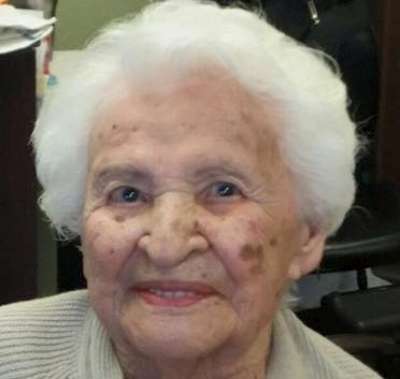 Mary Favela Knowlton, 99, passed from this world on August 15, 2015. Mary was born in San Joaquin, Sinaloa, Mexico on July 24, 1916. She resided in Arizona for the past 91 years. Mary worked at Luke Air Force Base making parachutes during WWII. She also worked for many years at Korrick and Diamond department stores in downtown Phoenix. She served as Cafeteria Manager at St. Catherine of Siena and St. Mary’s Elementary schools. She would be remembered most by her former students and helpers for her bread made fresh daily and her special peanut butter. The aroma of the bread could be smelled throughout the elementary school. Upon her retirement, Mary focused her life on baby-sitting her grandchildren and great-grandchildren, making tortillas and meals, gardening, sewing, spending time with her friend, Juanita Bartlett, and devoting her life to her Catholic Faith. Mrs. Knowlton was preceded in death by her husband, Willis E. Knowlton, her mother, Fernanda Favela, and her two brothers, Ovistano Favela and Joseph Favela. She is survived by her two children: Annie M. Conway and Willis E. Knowlton (Cindy). She also leaves behind her 5 granddaughters: Darlene Rodriguez (Benito), Sandra Conway, Nicole Knowlton, Michele Thorne (Matt), and Jamie Knowlton. She was blessed with 7 great-grandchildren: Phillip Lopez (Jennifer), Alex Lopez (Lovey), Selina Conway, Noel Rodriguez-Johnson (Marcus), Jackson Thorne, and Nicholas Thephasdin. She was proud to be the matriarch of five generations and those include her boys: Joseph and Jarrid Lopez., “Her Cookies”: Amaya, Zoe, and Kaylee Johnson, her “Flower”, Xochitl Lopez and “Star”, Xitlali Lopez. We are grateful for the Hospice of the Valley’s support and care during her last days. Funeral Mass for Mary Knowlton will be held on Saturday, August 29, 2015 with a Rosary at 10:30 AM and Mass at 11:00 AM at Sacred Heart Catholic Church, 1421 S. 12th Street, Phoenix. A private interment will follow at a later date in Silver City, NM.

Offer Hugs From Home Condolence for the family of KNOWLTON, MARY FAVELA