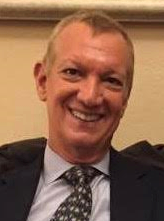 55, passed away unexpectedly on June 13, 2017. He was born on June 24, 1961 in Chicago, Illinois to Peter and Matina Kokalis. In 1962, the family moved to Phoenix where he spent the majority of his life. George attended Phoenix Country Day School from kindergarten through high school where he developed many life-long friends. He always loved to learn and maintained his commitment to education, graduating from ASU and earning his MBA from the University of Chicago. He continued with his education up until the day he died taking online property tax classes through the University of Southern California. George enjoyed a long career in property tax and had recently taken a new position for which he was thrilled. George loved yoga, sports, especially his Chicago teams and enjoyed watching his nephews play football. He always lit up a room with his smile and sense of humor. George had such a kind and gentle soul that left a positive influence on all that met him. George loved being with his family and with the greatest joy of his life, his daughter Zoe. He cherished every moment they had together. George was preceded in death by his father, Peter, only five short months ago. He is survived by his loving mother, Matina; his daughter, Zoe; his brother Jason and sister Eve Danoff (Robert); his nephews, Michael (Tiffany) Flores, Cody Kokalis, Max and Sam Danoff. In addition, he is survived by numerous cousins and many friends throughout the world. Visitation will be held Monday, June 19, 2017 from 5:00-7:00 P.M. with a Trisagion Service at 7:00 P.M. at Whitney & Murphy Funeral Home, 4800 E. Indian School Road, Phoenix. Funeral Service will be held on Tuesday, June 20, 2017 at 10:00 A.M. at Holy Trinity Greek Orthodox Cathedral, 1973 E. Maryland Avenue, Phoenix. In lieu of flowers, the family requests donations to Holy Trinity Greek Orthodox Cathedral or to the charity of your choice.

Offer Hugs From Home Condolence for the family of KOKALIS, GEORGE PETER