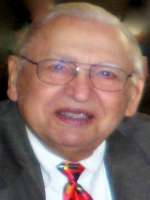 Kolesar, Stephen, Born 10-9-1921 in Wilpen, PA. Died in Phoenix, AZ, 1-3-2011. Stephen “Steve” Kolesar was preceded in death by his parents, John & Mary Kolesar, of East Pittsburgh, PA; sisters Ann Korytkowski of Phoenix, Arizona and Irene Button of North Huntdingdon, PA. He is survived by his wife of 65 years, Joan S. Kolesar, who he met in Phoenix in 1945, Brother John “Casey” Kolesar (Eunice) of Phoenix, and sister, Elizabeth “Betty” Staso, of North Huntingdon, PA, daughters Patricia Edwards, Mary “Twink” Smith (Dave), Janet Fisk (Don),Carol Prehoda; sons Stephen M. Kolesar (Linda), John “Jerry” Kolesar, Thomas O. Kolesar (Mary), Peter R. Kolesar (Marilyn), Edward J. Kolesar and Charles R. Kolesar (Ann). He is also survived by 25 grandchildren, 10 great grandchildren, and two great-great grandchildren and many nieces and nephews. Steve grew up in Western PA and Graduated from Ligonier High where he lettered in football and basketball. In the Wilpen area, he played baseball for a local semi-pro baseball team starting at age 14. He spent a year recovering from asthma and bronchitis after High School. On the advice of his doctor, he moved West to Arizona in search of a drier climate for health reasons. Upon arriving in Arizona in 1942, he went to work for Goodyear Aircraft as an Assistant Chief Inspector for the “flying squadron”. Later while at Goodyear Aircraft, he was assigned to “Central Communications”. He was later assigned to the conversion of B-24s into PB2Y3s for the War effort. This included the repair of B-52s damaged while making bombing runs over Tokyo, and other Japanese cities in 1942. While working in Phoenix at that time, he also played semi-pro baseball for the Phoenix Thunderbirds and the Glendale Grays. He built a reputation as a talented baseball player and was offered a scholarship to the University of Arizona to play football and baseball in 1945 and 1946, where he earned letters in each. Dad was very proud that he played on the ONLY untied, undefeated Wildcat football Team in school history in 1946. After his sophomore year he signed a Professional Baseball Contract with the Boston Braves Organization for whom he played for three years before a shoulder injury cut his career short. After baseball, he moved back to Phoenix to work for Schade Storage and Transfer. He later went to work for McKesson & Robbins in 1950 as a salesman, where he excelled. His McKesson Division was later sold to William Schubert, where he enjoyed further success. Glenmore Distilleries hired him as their Regional Representative. Three years later he began a series of entrepreneurial enterprises. Through the childhood of his sons Steve, Jerry and Tom, he coached Little League and assisted in Boy Scout outings as a chaperone. He also taught his children how to play golf, as well as other sports. He enjoyed duties as an Usher, and a Member of the Knights of Columbus at St. Francis Xavier Church in Phoenix. A Visitation will be held from 5 to 7 PM with a Rosary and Prayer Vigil at 7PM, Thursday, January 6, at Whitney & Murphy Funeral Home, 4800 E. Indian School Road, Phoenix. Funeral Mass will be held at St. Francis Xavier Church, 4715 N. Central Avenue, Phoenix at 1:30PM on Friday, January 7th 2011. Private graveside service will be held for the Family at a later date. In lieu of flowers, donations to St. Vincent DePaul, or the “Etched in Our Hearts” St. Francis Xavier Building Fund would be appreciated.

Offer Hugs From Home Condolence for the family of KOLESAR, STEPHEN