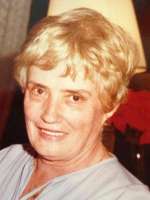 passed away on March 1, 2013 at the age of 90. Nivea is preceded in death by her husband, Eugene F. Kosak and son, Robert “Bobby” Kosak. She is survived by her loving son Daniel M. Kosak (Rose) and daughter Joneé McIntosh (Steve). Nivea will be dearly missed by her brother, Dan Scarpone, sisters-in-law Gloria Scarpone and Reneé Rose, 10 grandchildren, 14 great-grandchildren and many nieces, nephews and friends.  Nivea was born on October 16, 1922 in Uniontown, PA and was raised in Warren, Ohio. In the late 1940’s she moved to Phoenix with her family and married in 1951. She was a loving wife and proud mother. Nivea cherished her family and was a friend to all that met her. She had a quick wit and a ready smile and loved being in the company of others. Nivea will be remembered as a woman of great faith. A Visitation will be held from 6 – 8pm Wednesday, March 6th, at Whitney & Murphy Funeral Home, 4800 E. Indian School Rd Phoenix.  Funeral Service will be held at 11:30am,Thursday, March 7th at Whitney & Murphy Funeral Home followed by a Graveside Service at 1:30pm at the National Memorial Cemetery of AZ, 23029 N. Cave Creek Rd. Phx.

Offer Hugs From Home Condolence for the family of KOSAK, NIVEA “Eva”