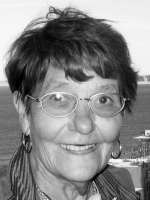 passed away peacefully in the arms of her granddaughter as the sun set on the evening of June 1, 2011. Serenaded by Frank Sinatra, she left this world exactly as she intended surrounded by her beloved family. Born in Chicago on May 22, 1935, Rita was the youngest of seven children to Polish immigrant parents. She loved her Chicago adventures that lead her to a bar in Cicero where she met her husband of 47 years, Donald. In 1964, Don and Rita moved their family to Phoenix and opened Phoenix Sandblasting & Coating Co. After 25 years in business, Rita and Don retired and traveled the world, visiting her family home in Poland, and taking one of the last flights on the Concord. But her favorite place was her home in Rocky Point where she shared 40 years of memories with family and friends. Known as Rita “Balls” to those that loved her, she was one of a kind with her feisty, unique charm, receiving a “Sassiest Gal” award from the Arthritis Foundation for her years of volunteering. Completely devoted to her family, Rita’s memory will live on in her two daughters, Colette and husband Patrick Ford, Michelle and husband Tod Thorpe; her grandchildren, Kendra and Dustin Ford, and Nicholas Thorpe; her sisters Mickey Sumoski, Josie Sporek, brother Stanley Hodor and sister-in-law Ann. Rita would often say “Udają się z Bogiem” in Polish, which means “Go with God.” Udają się z Bogiem Grandma Balls, you will be greatly missed. Visitation will be held 5:00 – 8:00 P.M., Thursday, June 9, 2011 at Whitney & Murphy Funeral Home, 4800 E. Indian School Rd., Phoenix. Funeral Mass will be 10:00 A.M., Friday, June 10, 2011 at Franciscan Renewal Center Casa de Paz y Bien, 5802 E. Lincoln Dr., Scottsdale. Interment at St. Francis Catholic Cemetery, 2033 N. 48th St., Phoenix. In lieu of flowers, the family requests that donations be made to Hospice of the Valley, 1510 E. Flower St., Phoenix, AZ 85014.

Offer Hugs From Home Condolence for the family of KOWITZ, RITA THERESA “BALLS”