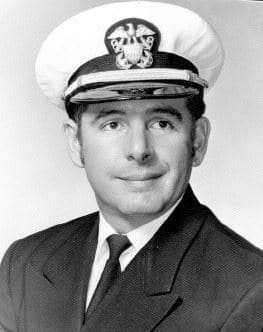 On January 6, the family and friends of Charles B. Krieger gathered to say Farewell for now while he transitioned home with his Creator to be united with his family, good friends and shipmates who have gone before. Charles was the only child of William B. Krieger and Janet Louis Layer Krieger. Charles is survived by his wife of 38 years, Shirley; three stepdaughters whom he considered his own; five grandchildren; and five great grandchildren. A private memorial service will be scheduled at a later day with family members only. Charles lived by the “Golden Rule” and the tenants of the Masonic Order as a 32nd degree Scottish Rite Mason. He was commissioned as a naval officer in 1959 after graduating from USC. Charles “stood the watch” for more than 20 years so his loved ones, shipmates and all Americans could rest easy with confidence in the opportunity to experience “Life, Liberty and the pursuit of Happiness” throughout their lives. With numerous assignments aboard ship and around the world including with the Office of Naval Intelligence, he served with distinction. In 2001 he was awarded a post graduate PhD considering his many years of public service. Subsequent career endeavors included Lockheed Aircraft; Pinkerton International and the Maricopa County Sheriff’s Department. Now that God has called Charles home, he is therefore “Relieved of Duty” and can now truly “Stand Down and Sail into the Sunset” with honor and a lifetime of memories. Condolences may be expressed at www.whitneymurphyfuneralhome.com.

Offer Hugs From Home Condolence for the family of KRIEGER, CHARLES B.