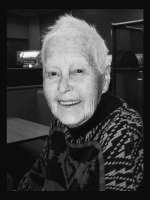 On April 11, 2012 John and Agnes Shea welcomed their little girl Gertrude Shea Krueger into their loving arms. Gertie was born May 12, 1919 in Plaza, ND and moved to Phoenix, AZ in 1949. She worked for Clover Club Foods for 35 years producing the finest potato chips ever. She was preceded into Heaven by her beloved five sisters: Cecilia Shea, Mary Agnes Jones, Loraine Shea, Isabelle Regens, and Anna Fitchner. Also preceding her were her husband Fred Krueger, nephews George and Pat Jones, and brothers-in-law Marvin Jones, Steve Regens, and Ray Fitchner. Gertie was a 100% Irish lass who loved nothing more than having fun with her family and friends. She is survived by her daughter Patsy Krueger and her much loved nephews and nieces: John Jones, Agnes Revilla, Leroy Jones, Margaret Jones, Grace McWhorter, Fran Lockwood, Doris Rohr, Bob Jones, Barbie Jones, Debbie Paynter, Bonnie Hanen, Dee Dee Ragsdale, Dennis Fitchner, Cindy Soqui, and her handpicked “son” Red Ortiz. Gertie is also survived by a host of great and great-great nephews and nieces all of whose lives she was actively involved in. She also leaves five little dogs who she adored. Thanks to Joe and Kevin for planting their “Gertie” rose bush and the rest of Gertie’s extended family at Jerry’s Restaurant for providing her with much love and many good meals throughout the years. Her spirit will roam around her “CHEERS without the brew.” Visitation will be held from 5-8pm, with a Rosary at 7pm, Thursday, April 19, 2012 at Whitney & Murphy Funeral Home, 4800 E. Indian School Road. Funeral Mass will be at 10am, Friday, April 20th, at St. Agnes Catholic Church, 1954 N. 24th Street, Phoenix. Interment will follow at St. Francis Catholic Cemetery. Wake 1:30pm at Jerry’s Restaurant, 2323 E. Thomas Road, Phoenix. In lieu of flowers memorial donations to St. Agnes Catholic Church or to the animal rescue of their choice.

Offer Hugs From Home Condolence for the family of KRUEGER, GERTRUDE SHEA