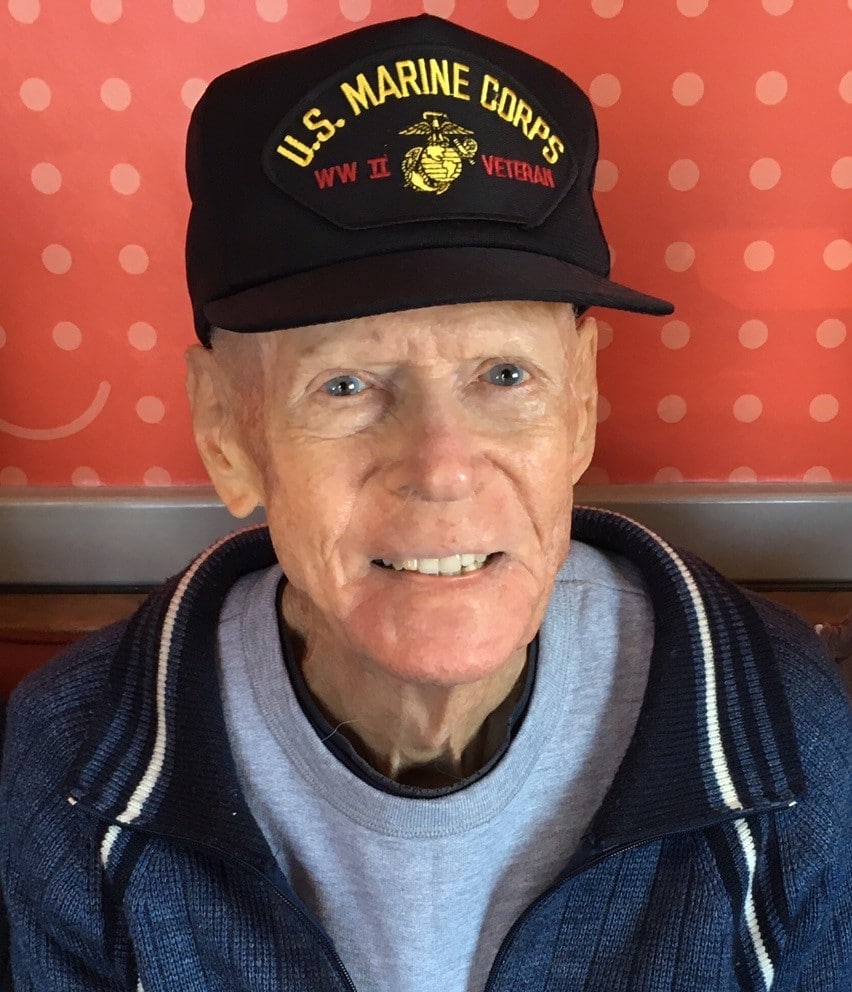 Joseph Krupa of Scottsdale, Arizona died on July 7, 2020 at the age of 95. He lived in Phoenix, Arizona since 1981, and resided at The Gardens of Scottsdale, an assisted living facility for the past two years.

Joseph was born at home in Ashley, Pennsylvania to Stephen and Katherine (Pavlisko) Krupa. He was the seventh of eight children, all first-generation Americans of Czechoslovakian immigrant parents. Joseph worked during high school in the advertising department of American Stores in Wilkes-Barre, Pennsylvania. He graduated in 1943 from Ashley High School, where he participated in glee club and was the vice president of his class. The same year he enlisted in the United States Marine Corp during World War II. He attended boot camp at Parris Island, South Carolina. Following his early training, Corporal Krupa was assigned to the Survey Team of the 13th Marines Regiment, which became part of the 5th Marine Division that was activated at Camp Pendleton, California. He served on the Survey Team and survived the Battle of Iwo Jima. Joseph’s 5th Division troop received a Presidential Unit Citation awarded for extraordinary heroism on Iwo Jima in February 1945. Joseph witnessed the U.S. Marines raising the American flag atop Mount Suribachi on Iwo Jima in the final stages of the Pacific War.

Following his honorable discharge from the Marines in 1946, Joseph attended Syracuse University on the G.I. Bill, where he majored in advertising and graduated in 1950 with a bachelor’s degree in business. Between college semesters, Joseph worked for his older brothers back home in the family-owned soft drink bottling business, Mission Beverage Company in Ashley, Pennsylvania. While at Syracuse, he was the treasurer of the Alpha Delta Sigma professional advertising fraternity, the secretary of the Kappa Chi social fraternity, co-editor of the college paper, and a member of the Industrial Relations Club.

Following graduation, he worked in management for the Sears, Roebuck and Company in Pennsylvania, Ohio, and Illinois locations from 1950-1962. He participated in the local Lions Club and was a member of the Jaycees. In 1962, Joseph joined the national sales team of WEJ-IT Expansion Products, Inc. headquartered in Broomfield, Colorado. Through the years, he was active with the Rotary Club, traveled extensively for business, and rose to Vice President of Sales. Joseph moved to Phoenix, Arizona in 1981 where he enjoyed golfing, and took a variety of cruises which took him around the world. He officially retired in 1990, continuing to enjoy the desert climate of Arizona and taking long walks around his neighborhood. Joseph was a survivor and fiercely independent, despite gradually losing most of his eyesight to macular degeneration. He proudly lived on his own until two years ago.

Joseph was predeceased by his toddler sister Catherine (1919), his parents, and all of his adult siblings and their spouses: Stephen, Jr. (Leocadia), Andrew (Ann), Mary Tuminelli (Peter), Paul (Mary), Susan Kopiczak Witkoski (Adolph; Edmund), and Frank (Nancy). He is survived by many nieces/nephews, grand-nieces/nephews, and great-grand nieces/nephews and their families.

Thank you to the caring professionals at The Gardens of Scottsdale for supporting Joseph. Special thanks to Rapheal C., Tieg B., Darion C., and Gaye F.

Memorial donations can be made to the Arizona Center for the Blind and Visually Impaired (ACBVI), 3100 East Roosevelt Street, Phoenix, AZ 85008 www.acbvi.org or to the American Macular Degeneration Foundation (AMDF) P.O. Box 515, Northampton, MA 01061 www.macular.org

Offer Hugs From Home Condolence for the family of KRUPA, JOSEPH GEORGE