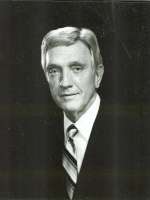 Of Scottsdale, Arizona, passed away August 1st, 2011 at the age of 87. He is survived by his wife Frances, nieces and nephews Patricia and Jake Ross, Barbara and Terry Pope, Chuck Kupcik, Alexis and Richard Thompson, Nancy and Martin Martonik and several great nieces and nephews. Peter was born in Pennsylvania, graduated from Penn State University, where he was a member of Phi Sigma Kappa and attended the Pacific Coast Banking School. He served in the United States Air Force. He was Vice President at the First Interstate Bank in Tucson and in Phoenix. While in Tucson, he was President of the Tucson Optimist Club, Chairman of the Tucson Caballeros del Sol, President of Junior Achievement, Treasurer of the Tucson Trade Bureau, Tucson Board of Directors of the Tucson Rotary Club, Chairman of the Tucson Clearing House Assn and member of the Skyline Country Club. His affiliations with various organizations in Phoenix include President of the Phoenix Little Theatre, Chairman of the Phoenicians, Phoenix Rotary club Board of Directors and various committees of the Phoenix Chamber of Commerce as well as a member of the Arizona Country Club. Funeral Mass will be held at 11:00am, Monday, August 8th, 2011 at St. Theresa Catholic Church, 5045 E. Thomas Road, Phoenix. Interment will follow at St. Francis Catholic Cemetery. Donations in lieu of flowers are to be made to St. Vincent de Paul Society or St. Theresa Catholic Church. Arrangements entrusted to Whitney & Murphy Funeral Home.

Offer Hugs From Home Condolence for the family of KUPCIK, PETER F