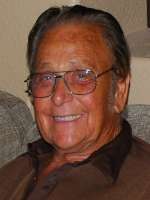 John W. Lapusan of Tempe died 07/28/12 . Son, Brother, Husband, Father, Grandfather, Great Grandfather and Friend. John was born in St. Louis, MO. on 11/29/1928. He joined the Navy at 17 years old and was honorably discharged in 1947 as an Electronic Technician Mate Third Class. Married Betty Devine in 1952 and they moved to Phoenix, AZ in 1960 where John founded Fine Wire Coil Company. He was hired with Phoenix Fire Department in 1962 where he served as a Fire Fighter, Engineer and Arson investigator for 21 years. He had a love of flying and received his private pilot’s license in 1983. He logged many hours flying all over the US and Mexico where he owned a restaurant & trailer park in Bahia Kino. He had a passion for family, friends, travel, camping, deep sea fishing, water skiing, dancing, singing and just enjoying life. He was always there to lend a hand. He could fix anything and if he didn’t know how he would “Johnny Rig” it. He was kind, loving, innovative, generous, hard working and always had a project to keep him busy. He was an avid Diamondbacks fan and enjoyed season tickets for many years. Even through his illness John never complained and remained positive till the end. He will be missed by many. He is survived by his wife Betty; daughters, Patty Kuzia (Ed), Janet Turner (Dave), Jean Reblitz (Peter), Peggy Lapusan; brother, Mike Lapusan (Cookie), sister, Vilma Finnern (Harold); grandchildren, Garett, Ashley, Tracey, Angela, Jonathan, Dylan, Brandon, Trevor, Donny, and Tim; plus 6 great grandchildren. He was preceded in death by his two brothers, Greg and Mark Lapusan, and sister Miczi Nickens. Visitation will be 5-8pm on Thursday, August 2, 2012 with a Funeral Service at 9am, Friday, August 3, 2012 both to be held at Whitney & Murphy Funeral Home, 4800 E. Indian School Rd. Phx, AZ 85018. Burial to follow at 11am at National Memorial Cemetery of AZ. In lieu of flowers the family respectfully ask donations be made to United Phoenix Firefighters Charities, 61 E. Columbus, Phoenix, AZ 85012.

Offer Hugs From Home Condolence for the family of LAPUSAN, JOHN W.