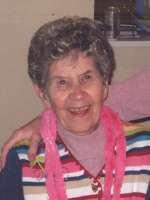 Florence “Flo” Larkin passed away peacefully Monday, June 6, 2011 at the age of 84. She was born on January 21, 1927 in Columbia Heights, MN. In 1946, her adventurous spirit led her to Washington, DC where she worked as a secretary at the Pentagon. In 1951, she and her girlfriends moved to Phoenix, where she met her husband, Jim. They were married in September 1954. While raising their children, she also worked as a secretary for the Safari Hotel in Scottsdale. In 1970, Florence ran the school office at Gerard Catholic High School in Phoenix until it closed in 1989. In this role for 19 years, truly one of her favorite jobs, she touched the lives of many students, teachers and parents. In her retirement, she and Jim spent their summers at their home in Greer enjoying reading, walking, gardening and teaching grandchildren to play scrabble and Michigan rummy. Florence was devoted to her family and her Catholic faith. She is preceded in death by her husband, James, and her three brothers. She is survived by her children Jim, Peter, Mary and Joe; one brother, Kazimer, two sisters, Julie and Gladys, 13 grandchildren and two great-grandchildren. Visitation will be held Sunday, June 12 from 5-7pm, with a Rosary at 6pm at Whitney & Murphy Funeral Home, 4800 E. Indian School Road. Funeral Mass Monday, June 13, at 10am, at Our Lady of Perpetual Help Catholic Church, Main Street and Miller Road, Scottsdale. In lieu of flowers, please send donations to Hospice of the Valley, 1510 E. Flower Street, Phoenix, AZ 85014

Offer Hugs From Home Condolence for the family of LARKIN, FLORENCE B