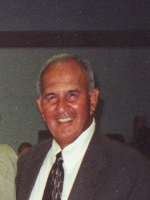 passed away on May 11, 2010. He was born October 3, 1929 in Kalamazoo, Michigan to Natale (Chris) and Anna (Anselmo) LaScala. He was very active in high school and college sports, and was inducted into the Kalamazoo Area Catholic Schools Athletic Hall of Fame in 2002. He earned 8 varsity letters at St. Augustine High School, led the school to 4 district and 3 regional basketball titles, and a Michigan state quarterfinal victory in 1947. He signed a professional baseball contract with the Chicago White Sox and was assigned to their Seminole Oilers minor league affiliate in Oklahoma. He served his country during the Korean War and attended Aquinas College and Western Michigan University in Michigan before starting a career with First National Bank of Michigan. After retirement, he relocated to Arizona. His interests included spending time with family, playing golf and swimming.
He is survived by his 8 children: Joanne (Jeff) Ginter, Thomas (Mary), Marie (Chris) Jackson, Joseph (Tawyna), James, Sally (Ron) Barta, Anne and Judith, 11 grandchildren, brothers Anthony and Louis, sister Lucille and 15 nieces and nephews.
A funeral mass will be held for Nathan at St. Patrick Catholic Community, 10815 North 84th Street, Scottsdale, AZ, 85260 on Monday, May 17 at 1:00pm. In lieu of flowers, contributions can be made to St. Mary’s Catholic High School athletic department in memory of Babe.

Offer Hugs From Home Condolence for the family of LASCALA, NATHAN JOSEPH