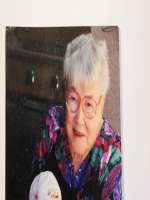 92 joined her husband Patrick for her eternal reward on November 27th, 2012. The first born of 4 children to Robert and Susan hughes on May 18th, 1920-Jersey City, NJ in 1947. Eleanor moved with a sick husband, 2 children and $60 from New Jersey to resettle in Phoenix. In 1950, Eleanor and Pat ecame a founding family of Ss. Simon & Jude Cathedral. For 12 years, Eleanor was a devoted foster mother to 125 babies through Catholic Social Services. When her husband decided to attend ASU for a teaching degree, Eleanor returned to work to put him through school. After becoming a widow in 1972, Eleanor became a house “mother” for the priests and Sisters of Loreto at Ss. Simon & Jude Cathedral, for 16 years. Before retiring at the age of 72, Bishop Thomas O’Brien awarded Eleanor the honor of Senior Catholic Woman of the Year. She enjoyed the remaining 20 years of her life surrounded by her loving family. Survivors include daughter, Patricia Hiland (Jerry), son, Patrick (Linda), 7 grandchildren and 14 great-grandchildren-her “Honeybuns”. Visitation is Sunday, December 2nd, 2012 from 6:30-8:30 pm at Whitney & Murphy Funeral Home, 4800 E. Indian SChool Road, Phoenix. Funeral Mass is 10:00am, Monday, December 3rd, 2012 at Ss. Simon & Jude Cathedral, 6351 N. 27th Avenue, Phoenix. In lieu of flowers, the family would like donations made in her name to The Retirement Fund of the Sisters of Loreto, c/o The Convent at Ss. Simon & Jude Cathedral, 6351 N. 27th Avenue, Phoenix, AZ 85017.

Offer Hugs From Home Condolence for the family of LAVIN, ELEANOR