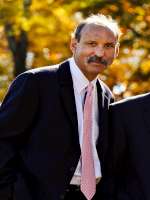 Our beloved father, son and brother left this life and entered eternal life on Friday, February 22, 2013.  Danny was born in Phoenix on August 7, 1960.  He attended Brophy College Prep and graduated from the University of Santa Clara in 1982.  Danny worked his entire career as a financial consultant.  Danny is survived by his beautiful children, Dylan and Megan, his former wife and mother of their children, Hallie Lawless, his parents David and Ellen Lawless and siblings, Tom Lawless and Cathy Gaudreau (Bill).  Danny was a great golfer and two time winner of The Men’s Club Championship at Arizona Country Club.  He was also a life member of the Phoenix Thunderbirds.  Danny loved life, his family and his many friends.  He will be sorely missed but never forgotten.  Our family appreciates the enormous outpouring of love for Danny.  Rest in peace our beloved Danny!  A Visitation will be held from 3-4pm with a Scripture Service at 4pm, Thursday, February 28, at Whitney & Murphy Funeral Home, 4800 E. Indian School Road, Phoenix.  Contributions can be made to Brophy College Prep Scholarship Fund.

Offer Hugs From Home Condolence for the family of LAWLESS, DANIEL P “DANNY”