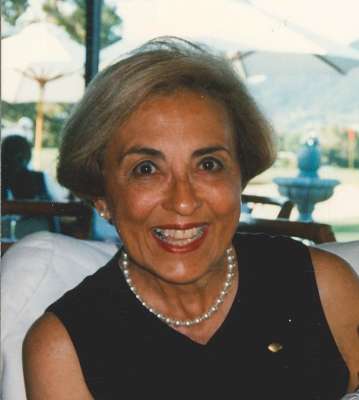 Mary Ellen Lawless (“Ellen”) passed away peacefully on February 11, surrounded by her family. Ellen was born November 20, 1929 in Columbus, Ohio. She was the daughter of Frank and Catherine Lonetti who immigrated from Italy. They settled in Fort Wayne, Indiana where she attended catholic school, and at the request of her father, Rosary College in River Forest, Illinois. After two years, she was free to choose any college and graduated from University of Michigan, Ann Arbor. During her tenure in Chicago, she met David Lawless who became the love of her life and they were wed in 1954 and celebrated their 60th anniversary in June. Their marriage resulted in three children whom they loved dearly and who worshiped them. They moved to Scottsdale in 1959 and Ellen became a very active participant in her children’s schools, her churches, the Central Arizona Dental Auxiliary, and the women’s golf group at Arizona Country Club. She was President of the Brophy Mothers Guild, and an avid bridge player. Ellen was a very elegant lady who revered family and home above all else. She was the consummate Italian chef for her family and friends and the golf staff at ACC nicknamed Wednesday nights Big El’s supper club, a term of endearment she loved until her death. Ellen is preceded in death by her son, Daniel Patrick, and her husband David who died this past October. She is survived by her son, Thomas David Lawless (Rebekah) of Phoenix, her daughter, Catherine Ellen Gaudreau (William) of Annapolis, Maryland, eight grandchildren and one great-grandchild. We are forever indebted to her caregivers Marlene, Eva, Raul, Vennie, Yolanda, Rebekah, and Hospice of the Valley. Arrangements entrusted to Whitney & Murphy Funeral Home. Services will be private. Memorial contributions may be made to the David and Ellen Lawless Scholarship Fund, Brophy College Preparatory, 4701 N. Central Avenue, Phoenix 85012.

Offer Hugs From Home Condolence for the family of LAWLESS, MARY ELLEN “ELLEN”