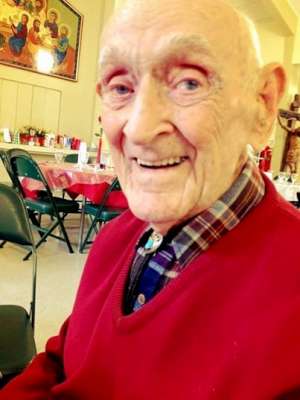 Patrick Anthony Lawlor recently passed away, living to the magnificent age of 94. He was born in the town of Ballybunion (where the River Shannon meets the Atlantic Ocean) in County Kerry, Ireland—he was the fourth of seven children. Patrick and one brother, Monsignor Timothy F. Lawlor, immigrated to America. As proud as Patrick was to be Irish, he was an even prouder American, fulfilling his childhood dream of moving to the USA. Any chance he got, Patrick would sing God Bless America, giving meaning to every word in the song.

Patrick worked for American Airlines for over 30 years, starting in Chicago then moving to Phoenix in the early 1950s, where he lived the rest of his life. When he started, Sky Harbor Airport was just a few hangars and the growth he saw in Phoenix over the years amazed him at every turn.  Patrick married the love of his life, Nora (also from Ireland), who preceded him in death by a few years. They were married for 60 years. Pat and Nora remain the proud parents of Linda, Bill, Noreen, and Mary Pat (Joe Cederna) and the even prouder grandparents of Mike and Maria Asimakis (Linda), Hannah and Danny Gabos (Noreen), and Saoirse Lawlor (Mary Pat Lawlor and Joe Cederna). Nora and Pat helped start Phoenix’s Irish Community in the early 50’s—first called The Friendly Sons of St. Patrick, then the Irish American Social Club—and have been honored many times throughout the years for their support and dedication to the Irish Community in the Valley of the Sun.  Patrick was everything that was right and good in this world; a kinder, gentler man will never again walk this earth. He will be missed more than words can express. Visitation will be held from 4-6pm with a Rosary at 5pm, Sunday, August 24, 2014 at Whitney & Murphy Funeral Home, 4800 E. Indian School Road, Phoenix.  Funeral Mass will be celebrated at Saint Theresa Catholic Church, 5045 E. Thomas Road, Monday, August 25 at 10 am with a reception following the service. Burial will be private. In lieu of flowers, please consider a donation to Hospice of the Valley or your favorite charity.

Offer Hugs From Home Condolence for the family of LAWLOR, PATRICK ANTHONY