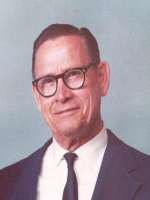 Blaine Luther Learn, died Wednesday July 25th, 2012 at 95 years of age. He was born in Cookport, PA December 19, 1916. He moved to Arizona with his family in 1921. He attended Madison Elementary and graduated from Phoenix Union High School in 1937. He began his career as a lineman at Salt River Project. He also worked on construction line crews building power lines, and for the Bureau of Reclamation hotstick crews before hiring on at Arizona Public Service in 1948. He retired from A.P.S. as an electric troubleman in 1981 after 33 years of service. In addition to his work as a lineman, Blaine also served in the Navy during WWII and the Arizona National Guard after his return home from overseas. Blaine married Bonnie Lenore Martindale on September 25th, 1942 and they enjoyed 59 years of marriage. Blaine also had many hobbies and interests that occupied his time. He was an active large bore rifle competitor shooting in matches all over the southwest and winning the 1963 Nevada state championship. He liked to play softball, golf, and bowl in the APS league and if there were more than two of anything in the world, he would collect it. He was preceded in death by his parents, John Henry and Hannah (Holmes) Learn and his wife, Bonnie. He is survived by his Sister, Kathleen Mudersbach; son, John Charles Learn and daughter, Sandra Karen Fadeley; grandchildren, John Adam (Essie), Carrie, Heather, Amy Learn, Fredric Dean Fadeley (Tamara); ten great-grandchildren and three nieces and nephews. He will be loved and missed by all who knew him. Visitation will be held Friday, August, 10th from 5-9 pm at Whitney & Murphy Funeral Home, 4800 E. Indian School Road. Funeral Service will be held Saturday, August 11th at 2:00 pm at the Camelback Seventh Day Adventist Church, 5902 E. Camelback Road. Interment will follow at Green Acres Cemetery.

Offer Hugs From Home Condolence for the family of LEARN, BLAINE LUTHER