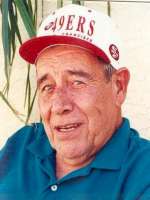 Passed away on May 5th, 2013 at 90 years of age.  He was born February 11th, 1923 in Williams, Arizona.  Moving to Peoria and later settling in Phoenix.  He graduated from Phoenix Union High School and proudly served his country with the U.S. Army in Europe while his four brothers were serving in the Pacific during WWII.  An accomplished woodworker and jack of all trades he along with his brothers built his family home where he and his wife raised eight children.  He crafted dressers and cabinets for his children and grandchildren that will remain family heirlooms for years to come.  An avid hunter and outdoorsman he taught his children to love and respect nature in all its glory.  After a 36 year career with Reynolds Metal Co. he retired in 1984.  He leaves behind Rosa his loving wife of 63 years, brothers Victor and Salvador, sisters Ruth Gonzales (Norwalk, CA), Esperanza Hinojos, Josepina Soto, Mary Compton (Liberty, MO), eight children, sons Carlos, David, and Ramon, daughters, Gloria Flores, Esther Rojas, Martha Cuevas (Yorktown, VA), Sylvia Ramirez, Juanita Mead, fourteen grandchildren, three great-grandchildren.  He is preceded in death by brothers George and Edward.  This loving husband, father, grandfather, brother, uncle and friend will be greatly missed by all who knew him. Visitation will be held at 10:30am with a Funeral Mass at 11:00am, Thursday, May 9, 2013 at St. Agnes Catholic Church, 1954 N. 24th Street, Phoenix. Arrangements entrusted to Whitney & Murphy Funeral Home.

Offer Hugs From Home Condolence for the family of LEON, SEVERINO S. (WERO)