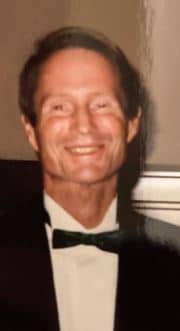 After several moves, the family settled in Lancaster, Pennsylvania where Jim attended Mannheim Township High School. He proved to be a tremendous athlete, starring in football, basketball and baseball, earning the opportunity to play both football and baseball at Brown University. In his Senior year at Brown, Jim was the Captain of the baseball team.

As they were heading West, destined for Los Angeles, they stopped in Phoenix for a job interview and never left. Jim was admitted to the Arizona Bar in 1966 and practiced for nearly five decades, most of them with his law partner and best friend Ken Clancy. He took tremendous pride in representing injured victims of medical negligence, particularly birth-injured children. His was a remarkable and accomplished career with record-setting verdicts both locally and in multiple other States across the nation.

Jim Leonard was known to be kind, generous, a devout Catholic and, above all else, a family man. After his family, he took the most pride in helping others. He was a professional mentor to other attorneys, a lecturer at professional conventions, a coach in youth sports, a selfless father and grandfather and a volunteer delivery driver for the St. Vincent DePaul.

He truly was a man for others. We are immensely proud to call him our husband, father and friend.

A Funeral Mass will be held at St. Francis Xavier Catholic Church, 4715 N Central Avenue, Phoenix on Monday, March 1, 2021 at 10:00 a.m. to which all are welcome to attend with a mask and/or other personal protection safeguards. The Mass will also be livestreamed at https://sfxphx.org/livestream
Although it is not specifically requested nor expected, those wishing to make donations in Jim’s honor are encouraged to donate to the St. Vincent DePaul. Condolences may be expressed at www.whitneymurphyfuneralhome.com

Offer Hugs From Home Condolence for the family of LEONARD, JR., JAMES J.