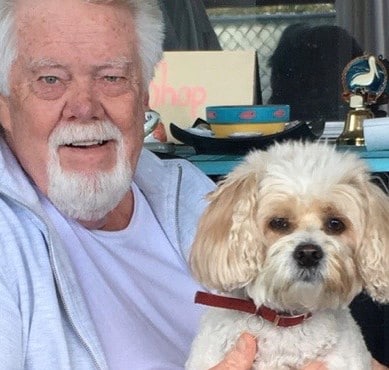 Joseph Francis Leopard, 73, of Scottsdale passed away Sunday morning June 14th at home with his loving wife Veronica (Roni) and daughter Heather at his side. Born and raised in Frankfort, Indiana, Joe was one of 6 children of Elza Leopard and Eileen Murphy Leopard. During his high school years, Joe’s family moved to Lafayette, IN where he excelled at high school football. That is where his passion for sports of every kind had its beginning.

Shortly after graduating high school, Joe enlisted in the US Navy and served 3 tours of Vietnam between 1965 and 1969. Serving on the iconic ship, the USS Enterprise, gave Joe lasting memories that shaped his life. For many years he has proudly donned his blue Navy hat—a baseball cap with United States Navy emblazoned on the front.

After his service to our country, Joe returned to Indiana but decided to relocate and start a new life in San Diego, CA. He and a couple of buddies began the long drive west but their stop in Phoenix changed Joe’s life forever. There, he met a young woman, who would become his first wife and the mother of his only child, Heather.
Although that marriage ended, several years later Joe met the love of his life, Veronica Walton. They married on Valentine’s Day in 1982 and just celebrated their 38th wedding anniversary this year.

With his big personality and desire to help others, Joe enjoyed a 43-year career in sales of printers and copiers. He was with several major office equipment supply companies in the Valley area.

After retirement, Joe worked hard on the game of golf, (his favorite) and he also enjoyed his time as a member of the Scottsdale Elks Lodge #2148. He gave a great deal of love and attention at home to a four-legged sweetheart named Molly, who is a fluffy bichon poodle mix. Joe just adored his little dog and the delight she brought to their home. Yes, she was totally spoiled by loving, caring Joe Leopard.

Joe’s greatest joy in life was spending time with family. He is survived by his wife Roni, his daughter Heather Leopard and his 3 grandchildren: Taylor Shea Liddle, his only granddaughter, and his twin grandsons Jake and Joey Liddle. Affectionately known to the grandchildren as “Daday”, he made an amazing impression on them all. Granddaughter Taylor shared these thoughts: “Daday taught me about unconditional love. He was always interested in what I was doing, and he made sure I felt valued and loved. He was hilarious and fun to be around and even took an interest in my friends. Daday was such a big part of my life and he’s taught me how I want to treat my loved ones.”

His Grandson Joey said: “Joseph Leopard was the greatest man I ever had the pleasure of knowing. He taught me the importance of family and made me the person I am today. He was more than a grandfather; he was a father figure and he made his family proud. He will always and forever live on in our hearts”. Grandson Jake agreed that “Joe Leopard was the greatest! My grandfather did everything he could to make sure his grandchildren were taken care of and happy. One special memory comes to mind: When my parents would say Memaw and Daday were coming over to grill-out and have a good time, I would be so excited. Then if Daday dripped just the smallest piece of cheese (which I hated) onto my burger and I cried about it…Daday was willing to grill me another just so I’d be happy!!”

Daughter Heather shared her thoughts by saying “He did his best work in life as a father, husband, and Grandpa (or Daday). Truly a one-in-a-million kind of man”.
Joe’s wife Roni remembers: “He just had a way with people…Little kids loved him, teenagers loved him, and adults loved him. Everybody loved my Joey”.

As Joe Leopard’s health began to fail earlier this year, he made a point of expressing satisfaction about the good life he had led. That is a gifted place to be at the end.
Rest in Peace, Joe, Joey, Uncle Joe, Daddy, Daday…. you will be missed so very much.

Offer Condolence for the family of LEOPARD, JOSEPH FRANCIS