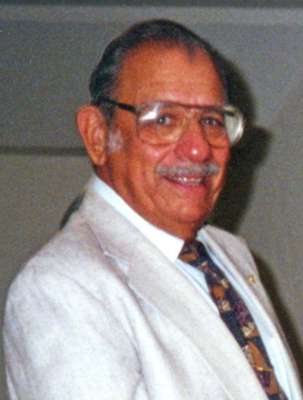 Richard S. Leopold, known by his friends as “Dick”, went on to enjoy classic jazz with all the saints on October 23, 2014. His lifelong passion for classic jazz music was well known by all those music lovers across Arizona. Dick was a WW II Army Medic. After returning to civilian life he graduated from University of Pennsylvania. Many years later he served as president of the Phoenix Chapter of the University of Pennsylvania Alumni Association. He was still active in his work with New York Life and in 2014 celebrated fifty years with this company as he provided service to clients, many of whom who had maintained lifetime communication with Dick. A dedicated businessman, he continued with his work even as he celebrated his 90th birthday dancing at his favorite club! Preceded in death by his beloved “Nikki” in 2009 we can hear those two laughing once more as they reunite! We, his children: Richard B. Leopold (Janet), Laurence S. Leopold (Mary deceased), Marcie Beggs (Gordon) and Jaimie Leopold (Ralph Sullivan deceased), and his over 30 grandchildren and great grandchildren miss him and celebrate the gifts he shared with us each and every day. Please join the family as we celebrate his life at the Arizona Classic Jazz Festival on November 9, 2014 at 10:45 a.m. in the La Ventana Room at the San Marcos Hotel in Chandler, Arizona. A Funeral Mass will be held 10:30 a.m. Friday, November 7, 2014 at St. Thomas the Apostle Catholic Church, 2312 E. Campbell Ave. All are welcome to join us at 1:30 p.m. at the National Memorial Cemetery of Arizona, 23029 N. Cave Creek Road, Phoenix as Dick’s ashes are laid to rest next to his beloved Nikki. No gifts please but we know he would appreciate donations be made in his name to the Arizona Classic Jazz Society, checks can be made payable to ACJS, 10918 E. Michigan Ave, Sun Lakes, AZ 85248 in support of scholarships for young jazz musicians.

Offer Hugs From Home Condolence for the family of LEOPOLD, RICHARD S.