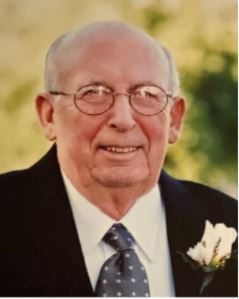 Ret. Deacon Joseph A. Lessard, 94, of Peoria, Arizona, passed away peacefully at home surrounded by family on Thursday, March 18, 2021. Joe was born on July 16, 1926 in Chelmsford, MA, the son of Leonile and Cora Lessard. His parents preceded him in death as did seven of his ten siblings: Edmond, Alfred, Rita, Doris, Esther, Yvette, and Jean. He married his sweetheart, Beatrice Mary Lessard on June 10, 1950 in Graniteville, MA and she preceded him in death on November 28, 2018. He is survived by his six children Michael, Susan, Barbara, Karen (Henry) Register of Scottsdale and their son Matthew; Richard Lessard of Scottsdale; and Janet (Dean) McAthie of Carmel, California and their children Emilia and Audrey. He is also survived by his sisters, Lucie, Pauline, and Theresa, plus 13  grandchildren and 8 great grandchildren. A United States Navy veteran, Joe enlisted on his seventeenth birthday. He served his country for four years during World War II in the South Pacific on the USS Tarawa as a gunner on torpedo planes. Joe loved a funny joke, whistling a tune, and savoring a good cigar. Always generous, he would give you the cash in his wallet, the first sip of his cold beverage, or the handkerchief in his pocket. His idea of relaxation was fresh-water fishing or watching planes take off and land at a nearby airport. Joe had an entrepreneurial spirit and a love for carpentry which led him to build his family’s first home in Groton, MA. When he and Bea moved to Phoenix, AZ, Joe worked for The O’Malley Lumber Company and later founded the Aztec Door Company, which grew to become the largest in the southwest. His custom mahogany doors are still prevalent in Paradise Valley and Scottsdale. Joe would later help oversee construction for the upgrades of the Mount Claret Retreat Center, a place very dear to his heart.
Devoted to his faith, Joe experienced a spiritual conversion which changed the direction of his life. It included further calling into the permanent Catholic diaconate for married men. He was ordained into the first Deacon’s class by Bishop McCarthy at SS. Simon and Jude Cathedral on May 29, 1972. Deacon Joe served parishes, developed prayer ministries, gave retreats, and led many people in the exercises of St. Ignatius in the U.S. and Canada. In retirement his ministry continued to flourish as a chaplain to the sick at Kindred Hospital and St. Luke’s Hospital, where he also served on the ethics board. He was beloved for his commitment to providing funeral services for anyone in need, often several each week. Joe’s gentle nature, love for people, and giving spirit will be greatly missed. He will be remembered as a wonderful storyteller and for always giving poignant fatherly advice. He was admired for his devotion to God, his children and his wife, especially during her extended illness. We will miss his warm smile and soft, comforting hands. We love you, Dad – you will remain in our hearts forever. Love Always, Karen, Richard & Janet
Vigil Service: Thursday, April 8, 2021 | 5:00-8:00 pm, Service at 6:00 pm | Whitney Murphy Funeral Home, 4800 E.
Indian School Rd, Phoenix. Funeral Mass: Friday, April 9, 2021 | 10:00 am | Our Lady of Perpetual Help Catholic
Church, 7655 E. Main St., Scottsdale. Interment following at St. Francis Cemetery (Mausoleum) | 2033 N. 48th St,
Phoenix. Reception following at Mount Claret Retreat Ctr. | 4633 N. 54th St., Phoenix
Condolences may be expressed at www.whitneymurphyfuneralhome.com
Flowers can be sent to Whitney Murphy Funeral Home.
Donations can be made to Mount Claret Retreat Center.

Offer Hugs From Home Condolence for the family of LESSARD, RET. DEACON JOSEPH A.