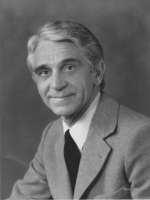 5.19.1921 – 10.12.2011
Dr. Hans Lettner was born in Munich on May 19, 1921. In 1940 he enrolled in the Munich medical school but with the advent of World War II, he was drafted and served in a German Mountain Division until wounded and medically discharged with the equivalent of the Purple Heart and the Bronze Star (Iron Cross). This allowed him to continue his medical studies. In 1944 he was drafted again as a Junior Medical Officer in a field hospital in Hungary and Yugoslavia. Only after the war in 1949, was he able to graduate from medical school with Magna Cum Laude distinction. After two years of postgraduate training in pathology and surgery at the University of Munich, he was invited to come to the USA. He spent two years as an intern at a Manchester New Hampshire Hospital followed by, as pathology resident, at the Mary Hitchcock Hospital Hanover NH, the Dartmouth Medical School and, eventually, at the New England Deaconess Hospital in Boston. In order to complete his pathology training he spent a year in Memphis, TN as chief resident and was then asked to join the staff as assistant pathologist. Dr. Lettner was Board Certified in Anatomical and Clinical Pathology. Desiring to enter private practice he accepted the advertised position in Hutchinson, Kansas as pathologist in 1959, first in solo practice for six years, then joined by Drs. Hinshaw, Shaw and Bryant with whom he had a cordial relationship. He was an early practitioner in Hutchinson . He served as Chief of Staff for the Hutchinson Hospital for two years; President of the Reno County Medical Society; President of the Kansas Society of Pathologists and President of the Kansas Association of Blood Banks. The Reno County Police Department awarded him the honorary title of “Police Lieutenant in Reserve” and a Deputy Sheriff plaque for his dedication and service as Medical Examiner. Dr. Lettner very much enjoyed his 30 some years in Hutchinson and the many very dear friends he developed both professionally and socially. Sailing was an early passion, as was skiing and he enjoyed many skiing vacations with the friendship and fellowship of Bob Shears, Ken Hedrick, Ace Dillon, Paul Dillon, Wayne Lowe, Bill Chalfant and others on mountainsides throughout Colorado and Utah as well as Europe. Dr. Lettner will be missed by his sister, Ilse and her family in Munich, Germany as well as by friends in Germany, Kansas, Dallas, Reno and Phoenix, Arizona where he retired in 1990, but continued to work part time , by invitation, at the Phoenix Indian Medical Center for 10 years. He will be most missed by his daughter, Monika (Lee) his son, Hans Peter (Jacque) and his three grandchildren, Alexandra, Jacob, Louise and Diane Kaegi and her family Kim, Ed, Brian and Marcia all of whom he loved very dearly. Memorial Service will be at 5pm, Monday, October 24, 2011 at Whitney & Murphy Funeral Home, 4800 E. Indian School Road, Phx, AZ. In lieu of flowers, donations to: Hospice of the Valley. Fund Development, 1510 E. Flower St. Phoenix, AZ 85014. Email: FundDevelopment@hov.org . Phone: 602.530.6992 .

Offer Hugs From Home Condolence for the family of LETTNER, HANS THEODORE