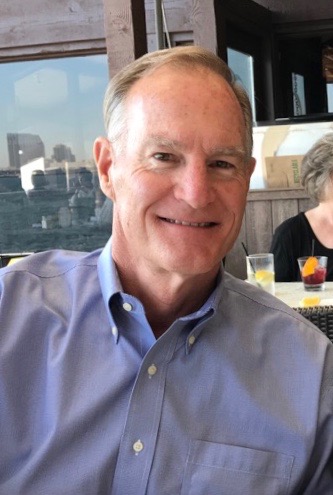 John Mosseman Lewis aka “Lew-Lew”, 66, died suddenly on April 18, 2019 in Phoenix, AZ. He was a cherished husband, father, grandfather, and friend. He shared his kind, welcoming, and generous spirit with everyone he knew.

John was born on November 25th, 1952 in Whittier, CA to John Francis Lewis and Nancy Ganahl Lewis. He was an identical twin and one of 5 boys. Being one of five boys provided John the ability to hone his athleticism from an early age. He exceled at both golf and basketball throughout his four years at La Serna High School until his graduation in 1971.

John came to Arizona in 1972 to attend Arizona State University and was an active member of the Phi Delta Theta fraternity, serving as president of the fraternity in 1974. During his time at ASU, he met the love of his life, Patricia Auther. He and Patty were married on February 28, 1976 in Phoenix where they soon were introduced to something John wasn’t used to from his childhood – girls. Patty and John were blessed with three wonderful daughters in Meghan, Bridget and Kelly and John took to being a dad like he had been doing it his whole life. Through 43 years of marriage, John’s priority has always been Patty and his girls – and they were lucky to have him. His daughters went on to meet three great men of their own, all of which had the ultimate role model in John when it came to caring for the women in their lives. By giving away his daughters, John also picked up three new permanent members to a golf foursome – although he never let them win.

John acted as a philanthropist throughout his life; he was a beloved member of the Phoenix Thunderbird organization where he served as The Phoenix Open Tournament Chairman in 1995. He constantly dedicated his time and skills to people around him, never asking for anything in return and always with a smile. From a golf swing to a business deal, John made tough tasks look easy. His legacy lives on as a gracious host and generous friend, who carefully tended to his home and garden with the love and devotion he gave to the people whose lives he touched.

Despite all these accomplishments, John’s proudest title was “Grandpa” and he cherished every moment he spent with his 5 grandchildren; Kameron Kober (11), Claire Pfeiffer (4), Blake Kober (4), Cole Pfeiffer (2) and Molly Climo (6 months).

In lieu of flowers, contributions can be made to the Desert Southwest Chapter of The Arizona Alzheimer’s Association at 340 E. Palm Lane #230, Phoenix, AZ 85004. Please note in the Memo “In Memory of John Lewis.”

Offer Hugs From Home Condolence for the family of LEWIS, JOHN MOSSEMAN