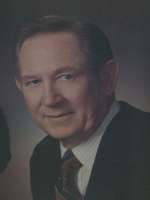 85, was born February 3, 1925 in Dallas, Texas and passed away on April 4, 2010. Growing up in Phoenix, he attended Kenilworth, North High, then the New Mexico Military Institute and the University of Arizona. In 1945, at the U. of A. he met and fell in love with a vivacious coed, Anna Grijalva. A year later they married and remained so for 61 years until Anna’s death in 2007. After serving our country in the Army Air Corps he and Anna raised their family in Phoenix. Jim was active in agriculture and farming in Missouri and Arizona. An avid golfer from the age of 12, he and Anna were members of Phoenix Country Club, Paradise Valley Country Club, Fairbanks Ranch Country Club, White Mountain Country Club and the Valley Field Riding and Polo Club. Predeceased by his parents, wife, Anna and son, Bruce, he is survived by son James R. Lochhead, grandson Jeffrey J. Lochhead and Jeffrey’s mother Margaret Lochhead. A Celebration of Life will be held at The Terraces, 7550 N. 16th Street, at 3:00 pm, Thursday, April 8th, 2010. Private Interment at Greenwood Memory Lawn. Memorial contributions may be made to Crossroads, Inc., 1845 E. Ocotillo Road, Phoenix, 85016-1150. Arrangements entrusted to Post Scripts by Posey and Whitney & Murphy Funeral Home.

Offer Hugs From Home Condolence for the family of LOCHHEAD, James Robert “Jim”