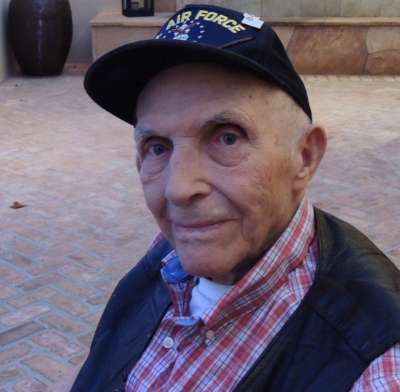 Major Raymond B. Lodin of Glendale, Arizona passed away peacefully on May 3, 2017, 3 days before his 94th birthday. He was proud of his military career which spanned 27 years. He earned a bronze star during WWII, where he also served as a POW captured during the Battle of the Bulge. His glory years followed as he served as a fighter pilot in the USAF. Representing his country in three wars, in WWII, the Korean and Vietnam and was in the U2 Dragon Lady Squad. He was preceded in death by his wife of 32 years, Sandra, parents Bert and Freda Lodin and siblings, Lois, Joyce, Merle and James. Survived by his brother Jerrold (Karen) and children and grandchildren, Lori (Tom) Kirkegaard, Jordan and Colby; Terri (Mike) Pelant, Danny, Kelsey, Nick and Ben; Scott Kvaale, Katrina and Hayden; Chris (Kim) Kvaale, Drake and Nicolette. Visitation will be from 11:30 A.M. – 12:30 P.M. at Whitney & Murphy Funeral Home, 4800 E. Indian School Road, Phoenix. A Graveside Service will follow at 1:30 P.M., Friday, May 12, 2017 at the National Memorial Cemetery of Arizona, 23029 N. Cave Creek Road, Phoenix 85024.

Offer Hugs From Home Condolence for the family of LODIN, MAJOR RAYMOND B.