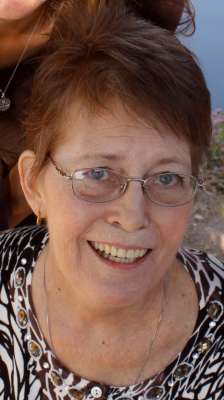 On June 14, 2015, Elizabeth Jane Lopez (Pelton) passed away; she was surrounded by family and close friends. Elizabeth, who went by Janie, was born in Louisville, KY on June 25, 1956. Janie’s childhood was spent between Louisville, Deming, NM and Phoenix, AZ. Some of her fondest childhood memories were of time spent in Deming and Louisville with her cousins. Eventually her family settled in Phoenix, where she attended Kachina Elementary School and then graduated from Arcadia High School in 1974. After graduation, Janie spent a month traveling around France. This not only gave her the opportunity to practice her French skills, her favorite language, but was an adventure that gave her a lifetime of memories. If she could have lived anywhere, she would have lived in a small village outside of Paris. She attended PC, SCC and NAU for a period of time. Janie was predeceased by her father, Daniel Pelton, and her younger sister, Shannon Lynne Smith. She is survived by her mother, Birda Pelton, sister, Mary Anne Webb, and her brother, Jay Pelton. Janie is also survived by her two children, Daniel Cantelme and Lindsey Cantelme. Her children were the joy of her life and she could be heard telling stories about them every day of the week, to anyone who would listen, willingly or not. She said the birth of her children were the best days of her life, both the most beautiful and painful. Janie had a passion for language, music and cooking. She believed that language and food bring people together. She could define or spell just about any word brought to her and most nights were spent listening to music, at whatever decibel she saw fit. She spent many years providing care to the elderly, as she was adept at providing both loving and firm care for others. Despite her many moves, Janie was skilled at making friends wherever she went. She would often join in games of poker or Scrabble, which she especially enjoyed playing with her dearest friend, Alan Scott. Janie was a loving woman and she will be deeply missed. Memorial services will be held at Whitney & Murphy Funeral Home, 4800 E. Indian School Road, Phoenix, on Thursday, June 18, 2015 at 4:00 pm. Her children ask that in lieu of flowers, donations be made to Central Arizona Shelter Services.

Offer Hugs From Home Condolence for the family of LOPEZ, ELIZABETH JANE