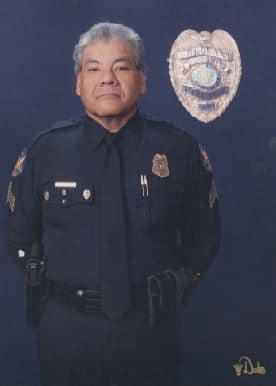 Elijio “Lico” Lopez, 80, of Phoenix, Arizona, the loving father of Melissa Lopez passed away quietly with Melissa and his best buddy Michael Hamilton on January 18, 2021.

Lico was born in Hurley, New Mexico on April 1, 1940 in the home of the town midwife. He proudly claimed his family roots were in New Mexico before 1848 and his deep love of Hatch chile. Lico attended Cobre High School- class of 1958. He then traveled to California to work for his uncle as a laborer –when he later learned that his father had told his Uncle to make him work very hard to learn the lesson of not going to college.

Instead, Lico enlisted in the US Army in 1961 where he discovered that while being stationed in Germany as a MP; this would later guide his future career in law enforcement with the Phoenix Police Department.

Lico was the only Chicano policeman in his graduating class of 1966. In 1967, while his wife Annie was pregnant with his first daughter Melissa, he was shot in the line of duty by snipers while protecting marching protesters. He received the “Police Shield” medal in 2017 for being shot while in the line of duty. Lico loved sharing stories from his departmental assignments, particularly in the protection of political figures and dignitaries. One of the most memorable assignments was protecting Cesar Chavez during his “Fast for Love” protest. Another story he recounted took place in 1968, where at an event at the Phoenix Country Club; and people of color were not allowed in the club, including law enforcement. He won the dispute against the club’s manager who refused access to provide security for the event with George McGovern. Other assignments he remembered fondly included the Community Relations and Homicide Investigations units. In 1982, he was the Sargent in charge in Internal Affairs during which he was responsible for the investigation into the Seventh Avenue Seven, which led to the dismissal of the 7 policemen. Lico was eager to move up the ranks and worked hard to achieve his goals. He earned his Sargent stripes in 1974 after completing his Bachelor of Sociology degree from Arizona State University. Hail Frank Kush!

After he retired from the Phoenix Police Department, he had two additional careers, the Arizona Department of Corrections in their internal affairs department for the next 10 years and as an investigator for insurance fraud for Progressive Insurance until 2003.

Of all of his career opportunities, his greatest love was applying his law enforcement experience and knowledge to students at South Mountain Community College. As adjunct faculty, he dedicated over 34 years to students in the criminal justice program. Criminal Evidence and Constitutional Law were the two classes that brought most joy in his teaching career. In the evenings after teaching, he would bring up hypothetical situations to his daughters and heavy discussions would ensue.

Lico was heavily involved in the community, whether it was initially creating an organization for Mexican-American Police Officers in 1978 (BMAPO) and now is known as the Arizona National Latino Peace Officers Association or as an active member and president of the Vesta Club, where he beamed with pride when his daughters and his nieces became debutantes. He loved organizing dance fundraisers and attending them, especially on his favorite holiday -New Year’s Eve.

American Legion Post #41 was where he met the love of his life- Annie Moreno. She spotted him at the bar and asked the guy sitting next to him to introduce her to him, of course he didn’t know Lico and said, “Introduce yourself.” Lico did and told Annie “My name is Frank Martinez”. Annie was so excited because her favorite uncle’s name was Frank Martinez. They dated for about 6 months, until she learned his real name and they married a short time later at Saint Mary’s Basilica in 1966.

After the passing of Annie in 2003, he was able to find companionship with Sally Soto, together they had many travelling adventures, good times, and laughter. His heart was full of the love of the children that were growing up around him, including his godson and great-nephew, Ikal Ramirez and goddaughter and great-niece, Quetzalli Ramirez. He loved the antics and experienced much joy spending time with his nephews Jacob and Caleb Ramirez. Susanna, Jing, and Michael would hold a special place in his heart. He took great pride in Michael as he watched him become a man, which he endearingly let him call him “Old Stuff”. He approved of the men in Jing’s and Susanna’s life (Stephen and Yeop).

Lico is survived by his daughter Melissa Lopez, his sisters Rita Ramirez (Sam), Helen Gaitan (Frank) and his brother Robert Lopez (Connie), as well as numerous nieces, nephews, cousins and other relatives and friends.

Melissa would like to express her sincere gratitude to the doctors and nurses at HonorHealth Scottsdale Osborn COVID-19 unit and ICU for the care of her father and for providing her and Michael the opportunity to be with him as he passed. Their dedication and effort to provide quality care for his hospital stay was a heartwarming blessing to the entire family. We thank God for the gift of his life and the blessing of the time we spent with him. One of the last events he was looking forward to was the inauguration of Joe Biden and Kamala Harris. Unfortunately, he did not get to witness it and we blame #45 for the stellar job he did in managing the pandemic (insert sarcastic laugh here). He was proud to have voted Biden/Harris!

A visitation will be held on Monday, February 1, 2021 at Whitney & Murphy Funeral Home, 4800 East Indian School Road, Phoenix from 5:00 – 7:00 P.M. The rosary will be available to view via the following link:
https://www.facebook.com/WhitneyMurphyFH/live/

A Mass will be celebrated honoring Lico on Tuesday, February 2, 2021 at 10:00 A.M. at Saint Mary’s Basilica, 231 N. 3rd Street with Interment immediately following at St. Francis Cemetery. The service will be available to be viewed on the church Facebook page at: https://www.facebook.com/SMBasilica

The family appreciates the heart-warming support and love they have received. They encourage everyone to stay healthy and safe and understand it is unsafe to be with them in person. For this reason, you can view the service via the link above. A celebration of life and the best Lico story completion will be held when it is safe for all the family to be together. In lieu of flowers, please send donations to Saint Mary’s Basilica’s building fund. Condolences may be expressed at www.whitneymurphyfuneralhome.com.

Offer Hugs From Home Condolence for the family of LOPEZ, JR, ELIJIO “LICO”