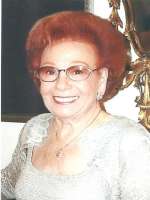 Emmie Leona Lowe-Ley (Lee Ley) passed away on Thursday, May 31, 2012, at the age of 92, in Phoenix, Arizona, surrounded by family. She was born in Alabama in 1920 and moved to Florida in
her early 20’s. She worked in the restaurant industry for much of her life owning her own café at a very young age. In 1970, she relocated to Scottsdale, Arizona. She was employed for many years by the Arizona Country Club where she put her own special touch on party planning. She worked with many of the Club’s members over the years planning events that instilled lasting lifetime memories for those members and their families. At home, her special craft, for which she was so proud of, was her needlepoint. Above all, her family was what she lived for. She was a loving mother, grandmother and wife and will be missed greatly by many. She is survived by her daughter, Robin G. Clark of Scottsdale, Arizona; granddaughter, Amber Lee Clark, of Phoenix, Arizona; grandson, Tyler Joseph Clark of Henderson, Nevada; brother, Concy Thomley, and sister-in-law, Nadine Thomley, of Clearwater, Florida. She was married for many years to Nelson Ley who predeceased her in
December of 2005. At her request, there will be no services.
The family would like contributions to be made to Hospice of the Valley in her name. Arrangements entrusted to Whitney & Murphy Funeral Home.

Offer Hugs From Home Condolence for the family of LOWE-LEY, EMMIE LEONA