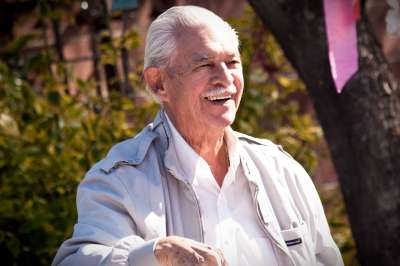 Rupert J. Loza Sr. of Queen Valley, AZ, passed away on May 26, 2015.  He was born February 1, 1919 in Phoenix, Arizona to Joe and Adeline Loza.  He served five years in the U.S. Army during WW II in Brisbane, Australia; after the war he worked at his father’s shoe shop in 1946, located on 1st Avenue & Jefferson in Phoenix.  Years later, Rupert became a Maricopa County Deputy Sherriff and proudly served under “Sheriff Cal Bois” for fifteen years.  He continued his public service as a Maricopa County Probation Officer for the Honorable Judge Howard Thompson for another fifteen years.  Rupert retired at the age of sixty four and lived a beautiful and wonderful retirement.  His personal hobbies and interests were violin music, family gatherings and many rounds of golf.   He is preceded in death by his lovely partner Medy Zannis, sister’s Pauline, Adeline, Josephine and son Edward.  He is survived by his immediate family Joey and Dave, Ralph and Kim, Rupert Jr. and Lorraine, Yvonne and Eddie, and many, many, grandchildren and great grandchildren.  Visitation will be held from 1:00 – 2:00 PM, with a Funeral Service at 2:00 PM, Saturday, June 6, 2015 at Whitney & Murphy Funeral Home, 4800 E. Indian School Road, Phoenix, AZ. Entombment will be conducted at St. Francis Catholic Cemetery Mausoleum located at 2033 N. 48th Street, Phoenix 85008, following the funeral service.  In lieu of flowers, please make a donation to the Hospice of the Valley at 1510 E. Flower Street, Phoenix, AZ 85014, either by mail, phone (602) 530-6900, or on-line at https://www.hov.org/donate , in memory of Rupert J. Loza Sr.

Offer Hugs From Home Condolence for the family of LOZA, RUPERT JOSEPH SR