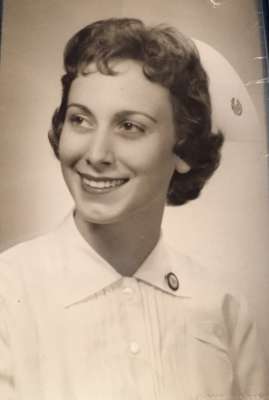 passed into the loving embrace of the Lord in the early hours of April 15, 2015, at the age of 77. Sally was born in Phoenix, AZ to Raymond Anthony and Mary Frances (Murray) Greff, the fourth of five children. She was preceded in death by her beloved parents and siblings Raymond, Elizabeth and James. Sally graduated from St. Mary’s Catholic High School and became a Registered Nurse after completing the Saint Joseph’s Hospital Nurses Training Program. Sally was a proud Arizona native who played flute in the high school band, loved music and the outdoors, was a devoted friend to many and a devout Catholic. She collected angels, was a crossword aficionado, enjoyed playing cards, and had a passion for flowers and songbirds, which richly populated her back yard. Together with her former spouse Donald D. Lozier, Sally brought seven children into the world; Jodi Lynn Lozier Von Reinhart (Walter) and sons Donald Raymond (Cheryl), Robert David (Susan), Fredrick Joseph (Karen), Brian Patrick (Christi), Kevin James and Daniel Scott. She is survived by her dear sister Mary Margaret Given (Edmund), her seven children, 17 grandchildren, six great grandchildren and countless cousins, nieces and nephews that were so dear to her. Known to her immediate family as “Gramma Sally,” her highest calling was loving mother and grandmother to her adoring family, their spouses, partners and friends. Sally treated everyone who entered her life as one of her own and the love, comfort and strength she provided for so many will be paid forward by all who loved and cherished her. A visitation and Rosary will be held Tuesday, April 21, 2015 from 5 to 8 p.m. at Whitney & Murphy Funeral Home, 4800 E. Indian School Road in Phoenix. A celebration of life Mass will be held at 10:30 a.m. on Wednesday, April 22 2015 at St. Thomas the Apostle Catholic Church, 2312 E. Campbell Avenue in Phoenix, followed immediately by a procession to St. Francis Catholic Cemetery for a graveside service. In lieu of flowers, donations can be made in memory of Rosalie Lozier to Catholic Charities Community Services Arizona, 4747 N. 7th Avenue, Phoenix, AZ 85013.