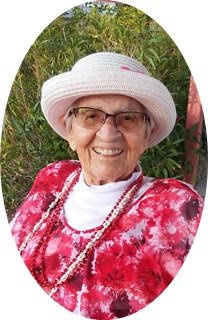 Leatha Hazel Everett was born in Woodland, Maine, where her parents had a potato farm. She was the fourth of five children born to Hazel and Sam Everett. She contracted polio (infantile paralysis) at the age of 6 months, and the disease left her with a lame left leg. She had her own pony cart to get her to school because she was not able to walk long distances. She completed High School but stayed in touch with her best friend from nearby New Sweden, Maine, Marion Lundgren. Marion didn’t drive, so she would get her older brother to drive her to visit Leatha. Her brother was very shy, but Marion saw some potential, and one day decided to pretend to not feel well, but encouraged him to go without her so Leatha wouldn’t be disappointed. Well, Clifton did just that, and romance bloomed. They were married on June 24, 1941, on his birthday.
All three of their (virtually perfect) children were born in Maine, but grew up in Phoenix. Clifton and Leatha made the move to Phoenix in 1951, for her health and because Clifton’s parents and older sister who had relocated five years earlier had the habit of sending pictures of sunny New Year’s picnics from Phoenix when the snow in Maine was at its worst!
Leatha was a homemaker, baking bread and cookies, as well as a skilled seamstress, making clothing for the whole family. She made matching outfits for herself and Clifton, or a tie from the fabric of her dress for Sunday wear. She also was an artist and musician, playing the tenor sax.
All of these activities revolved around her faith. She committed her life to Jesus as a teenager, and took that commitment seriously, trusting God to bring her the right life partner. They were married for 62 years, having decided to make Jesus a full partner in their marriage. They were in church with the family every Sunday, and Wednesday nights were church nights too. Leatha was active in Women’s Missionary Circle, and was always teaching or helping in some way. She loved Bible Study and enjoyed reading devotions to others.
Leatha and Clifton moved into Orangewood, aka The Terraces, on July 4, 1997. Leatha was a resident at The Terraces for 22 years. She would always say that she hadn’t met a bad person yet, and that she was ‘blessed beyond measure’. She didn’t even complain about dining services.
Anyone who has known Leatha for any length of time probably heard her singing as she tooled around the campus. When Leatha and Clifton first were married, her constant singing got on his nerves, and he asked if she could ever be quiet. After several days of total silence, he recognized the error of his ways. He apologized and learned to appreciate a wife who had a constant song in her heart.
Leatha leaves a legacy of one daughter, Mary (Franklin) Long, and two sons, Ev (Roberta) and Sam (Christine) Lundgren. She had a great influence on granddaughters Jacqueline (Grant) Lawson, Michelle long-Colclough, and Dawn (James) Beatty and on grandsons Shawn (Carrie), Joshua, and Christopher (Leena) Lundgren. Four great-grandsons, Mark Colclough, Lionel Noa and Zachary Lincoln, and Shawn Lundgren and six great-granddaughters Samantha Lundgren, Jahzara, Amaya, Jaleesa Lundgren and Eve and Ellie Beatty are getting ready to carry on her legacy. She had the respect and love of her daughters-in-law and son-in-law, and her whole family knew she was praying for them.
Leatha stayed active and found ways to help people, even when her physical disabilities required new methods. If you paid attention, you would realize where the saying about necessity being the ‘mother’ of invention came from. She was inventive, and would find a way to do what she needed and wanted to do. But what she wanted to do most was to please God, to serve God no matter what situation she was in. She learned to do that, even in a wheelchair, when she didn’t have a leg to stand on. To her last breath, she continued to make a positive impact on people, and she will be missed by many.

Offer Hugs From Home Condolence for the family of LUNDGREN, LEATHA