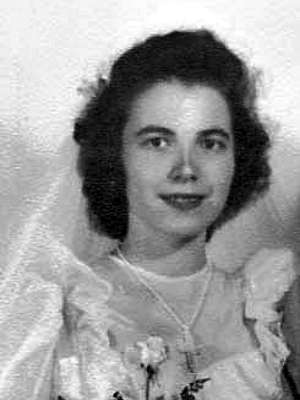 Mary Louise Lyding, our beloved Mother, Grandmother and Great-Grandmother, passed away peacefully on March 30, 2016, at the age of 92. She was born in Evansville, Indiana and moved to Phoenix, Arizona at the age of three. She graduated from St. Mary’s Catholic High School. She married Alfred Samuel Lyding, Jr. in 1943, and together they had nine children. Mother raised our family alone after the early death of our father when she was 35 years old. She recognized the importance of education which she demonstrated through her own profession as a school secretary at Palo Verde and Roadrunner Elementary Schools and through instilling this value in each of her children. Our parents’ dream was that their sons graduate from Brophy and their daughters from Xavier College Preparatories and that they then graduate from college. Mother was especially proud that all her children fulfilled that dream. When her youngest child graduated, we surprised her with a special “Graduation” party in her honor. Mother had the gift of making us all feel special and she liked nothing better than a large family gathering. Her 90th birthday party was attended by over 70 of her descendants and their spouses. Mary Louise is survived by eight of her children: Michael (Katherine), Barbara McLoone (John), Kathleen DeRouen (Perry), Judith (Carl Hanson), Kenneth (Victoria), Stephen (Debra), Jane Brotherton (Steven) and Christopher (Linnea), daughter-in-law Mary Lou Lyding, 25 grandchildren and 24 great-grandchildren. She is predeceased by her husband Alfred Samuel Lyding, Jr., son Alfred Samuel Lyding III, parents, Cecelia Ann and William Theodore Rohrbacher, brothers, Art, Elmer and James Rohrbacher, and sisters, Dorothy Levandowski and Irene Wesley. We thank Rhonda Crowner and her staff for their loving and excellent care which our mother enjoyed for five years at Desert Paradise Assisted Living Home. A Mass of Christian Burial will be held on Saturday, April 9, 2016 at 10:30 AM at St. Paul’s Catholic Church, 330 West Coral Gables Drive, Phoenix, preceded by a Rosary at 10:00 AM. The Rite of Committal will be held at 2:00 PM at St. Francis Catholic Cemetery. In lieu of flowers, we ask that you consider a donation to the National Parkinson’s Foundation www.parkinson.org.

Offer Hugs From Home Condolence for the family of LYDING, MARY LOUISE ROHRBACHER