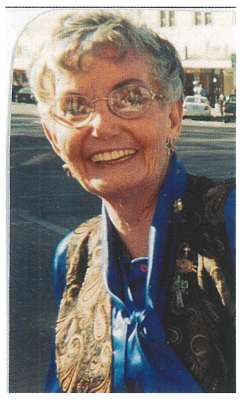 known as “Pat” came to Eternal rest March 9, 2015 with many of her family members and dear friends praying and visiting her to the end, when her heart finally gave out. Born to Irish parents and the only child in Lackawanna, New York. She attended Sacred Heart Academy and graduated in the class of 1945. She often went back for class reunions. Her painting of Sacred Heart still hangs when you enter the main door at the Academy. Shortly after high school, Patricia married John MacInnis and 7 years later moved to Phoenix, where she lived in St. Mary’s Parish. In 1967, she moved to North Phoenix where the family attended St. Francis Xavier Catholic Church. In 1976, Pat lost her husband of 29 years. He was a Phoenix Police Officer who died in the line of duty from a heart attack while chasing a suspect. A mother of 13 children, all still alive; Mary, Theresa, John, Raymond, Patricia, Patrick, Daniel, Christine, Bernadette, Margaret, Anna, Joseph and Virginia. Pat has 75 grandchildren, 90 great grandchildren and great, great-grandchildren on the way. Her children brought her Irish Brick at the Irish Cultural Center that reads “Pat Sullivan. MacInnis Clan’s.” She was preceded in death by her dearest friend Bob, a retired Marine soldier, and painter of fine arts who made a pencil drawn rose look alive and soft, for the last 35 years. Pat loved time with her family and traveling to her homeland of Ireland and many other places. Pat loved to work at St. Francis Xavier Catholic Church as a greeter, at the Marion Shop and serving coffee after Mass. Pat donated her drawings for auction at many fund raising events. She loved dancing, music, and old movies. Visitation will be held from 5:00 – 8:00 PM with a Rosary at 7:00 PM, Monday, March 16, 2015 at Whitney & Murphy Funeral Home, 4800 E. Indian School Road, Phoenix, AZ. Funeral Mass will be at 10:00 AM, Tuesday, March 17, 2015 at St. Francis Xavier Catholic Church, 4715 N. Central Avenue, Phoenix. Interment will follow at St. Francis Catholic Cemetery. In lieu of flowers donations may be made to the Phoenix Police 100 Club, 5033 N. 19th Avenue, #123, Phx., AZ 85015. www.100club.org.

Offer Hugs From Home Condolence for the family of MACINNIS, PATRICIA D.