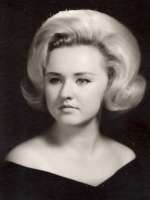 7/11/43 – 8/25/11, Kathleen was born in Chicago, Illinois in 1943 to loving parents, Walter and Emily Gabry. In 1953, along with her younger brother, Thomas Gabry, the family relocated to Phoenix, Arizona. Kathleen graduated from St. Gregory’s Catholic Elementary School and St. Mary’s Catholic High School. She attended the University of Arizona. Kathleen and Ronald Macsenti were married on May 30, 1968, settling in Phoenix where son, Deno Anthony, and daughter, Angela Lori, were born. The family moved to San Francisco, California until they returned to Phoenix in 1984, where Kathleen continued to raise her family. Kathy was a devoted and loving daughter, homemaker, mother, wife and friend. She will be forever loved and dearly missed. Kathleen is survived by her husband of 43 years, Ronald, and her children, Deno and Angela. A Rosary Service will be held Tuesday, August 30, 2011, 7 PM at Whitney & Murphy Funeral Home, 4800 E. Indian School Rd., Phoenix. A Memorial Mass will be held Wednesday, August 31, 2011, 10 AM at St. Gregory’s Catholic Church, 3424 N. 18th Ave., Phoenix. Flowers will be received at Whitney & Murphy. Donations are encouraged to Hospice of the Valley, 1510 E. Flower St., Phoenix, Arizona 85014; 602-530-6900; www.hov.org.

Offer Hugs From Home Condolence for the family of MACSENTI, KATHLEEN MARIE